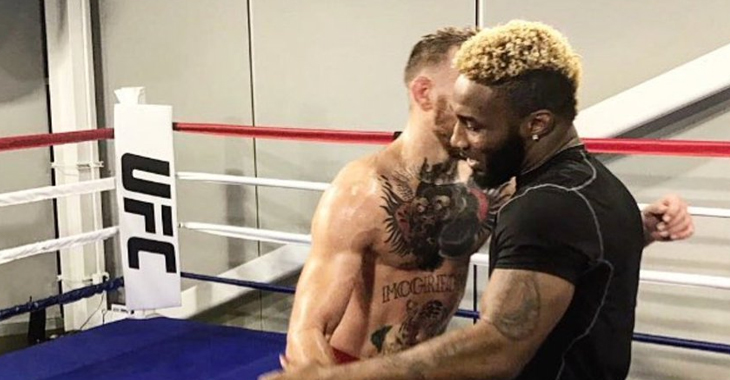 Most of Conor McGregor’s camp for Floyd Mayweather has been surrounded by controversy. Between the infamous Paul Malignaggi footage, as well as other boxers coming out of the woodwork to insult McGregor, all Conor needed was multiple racist allegations from Mayweather. Meanwhile, the rest of the world endures a tense political climate and tragic events in Charlottesville, Virginia. A topic that Mayweather evaded when asked during his recent conference call with media. Through all of this, Dashon Johnson wanted to shed a little light through the dark clouds. The young MMA fighter and boxer has been sparring with McGregor his whole camp and had a lot to say as training begins to conclude. “In a world filled with so much racism and hate, along with the recent horrific events that have occurred in Virginia, I hope this picture spreads some light and love on that matter. As you can see here, we are from different parts of the world and backgrounds — two brothers from different mothers, showing love to one another. Come August 26th, my heart bleeds for this man and is in his corner regardless of the outcome. Not because of his skill, but because he is a great human being and continues to show it outside the ring or Octagon. #Blessed #TeamMcGregor #Unity #StopTheHate #StopTheRacism #SpreadTheLove #TeamJohnson #Escondido #Flyboy #McGregorMayweather #History”

Released on Dashon Johnson’s private Instagram account, the statement is being passed around on social media and is sure to go viral. Not only does it give a look at another side of Conor McGregor, but it acknowledges the issues in Virginia that spread out far beyond the borders of just that state. Regardless of your stance, the image of two men from different backgrounds that have developed a bond through combat is hopefully something everyone can get behind.