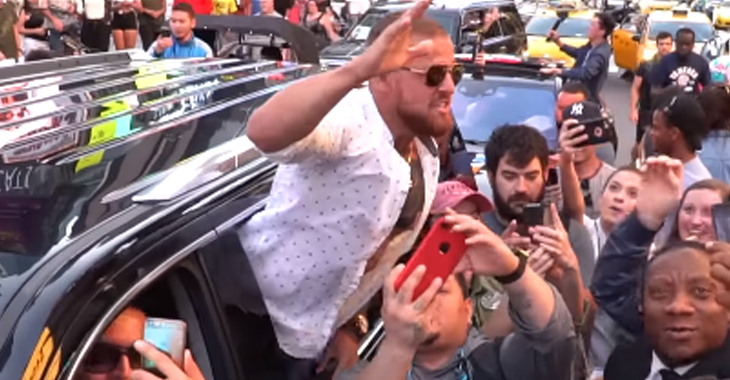 The private car convoy hits the strip. Guys with tight suits and midnight shades stand guard. People start to look around and feel some sort of anxious electricity in the air. A dark window creeps down, the crowd struggles to get a peak. Finally, out of the window pops Conor McGregor in a billowy, unbuttoned shirt and the whole city goes ballistic. Except it’s not Conor McGregor, it’s some guy named Islam Badurgov. Somehow, Badurgov has made a living as a professional street workout athlete. You know, doing thousands of different versions of pull ups on playground equipment? He also loves pulling pranks, like dressing up as an old man and doing incredible feats. So, this time he strutted into Times Square as Conor McGregor and fooled hundreds and hundreds of people despite not really looking like McGregor at all. Does it really only take painstakingly accurate fake tattoos and hay-colored beard? His own camera crew probably helps.

It’s amazing that he really pulls the wool over so many eyes. It must work though, his last Conor McGregor prank in Los Angeles is creeping up on 3 million views. Don’t people know he’s in Vegas prepping for Floyd Mayweather? Couldn’t you pull up a picture of McGregor on your iPhone and compare in person? It’s probably the case that fans just want to meet Conor McGregor so bad, that they’ll settle for a ripped Kazakhstanian with an entourage.