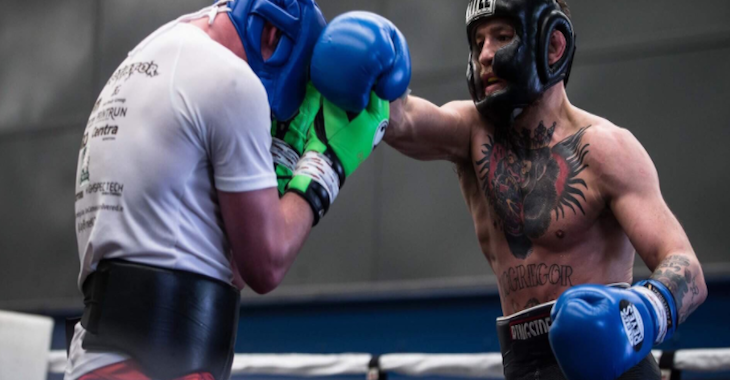 Conor McGregor‘s training camp for his August 26 boxing match with Floyd Mayweather Jr. is now well underway. The UFC lightweight champ is currently undergoing a crash course on the sweet science in Ireland, and will soon relocate to Vegas, where he spend the duration of his camp.

Today, McGregor shared a number of photos from his latest training session to Twitter. The captions attached to these photos seem  seem to suggest that the Irish superstar is focusing on developing the very same elusiveness for which Mayweather has become famous.

Here are the pictures:

I am not there pic.twitter.com/JnfDNcuMgb

Though McGregor still has eight odd weeks to prepare, his coach John Kavanagh recently claimed the mixed martial artist could be ready to box Mayweather in a mere three.

“We have two more weeks in Ireland, then the guys will head to Las Vegas,” Kavanagh said on Monday’s edition of The MMA Hour (h/t MMAMania). “We’ll then have six weeks in Vegas before the fight, but I watched the session today and said we would be ready in three weeks.”

How do you think Conor McGregor will do against Floyd Mayweather?