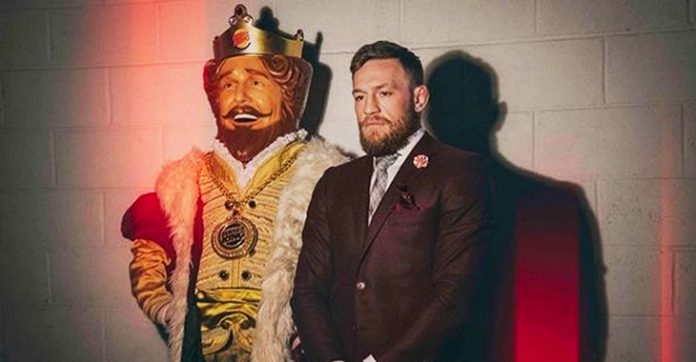 Conor McGregor goes by many names: The Notorious, Mystic Mac, Champ Champ™, and now he can truly call himself The Burger King. He’s flying high (and private) after his huge ad with the food giant, continuing to slay the game as he counts cash on the sidelines. Keeping his mind on money and money on his mind, McGregor was quick to congratulate Jay Z after it was reported by Forbes that the magnate overtook Diddy in profits. He was even quicker to point out he is set to do the same to Floyd Mayweather and Cristiano Ronaldo.

“Making deals and taking deals. Kings recognize Kings. Congrats to Jay Z on his number one takeover from Diddy in the highest paid Forbes list. What a takeover. Diddy hasn’t been number two in so long. Until now. Zoom into that two-tone with the powder blue on my wrist, mate. You might see first place again. I am also really interested to see this year’s Forbes highest paid athletes list. I have now surpassed Cristiano Ronaldo as I told him I would in 2016.”

There are two kings in this picture and only one in the fight game. Forget the rest. Big news on the way. @burgerking. #ad pic.twitter.com/aayNQuFDxP

“Floyd [Mayweather] as a retired fighter that makes zero substantial revenue outside of them ropes is not on the list, and in the long game, is already dead. Mixed Martial Arts is a glorious game, Floyd. You are going to love it hahaha. Someone tag 50 Cent in this for me. He blocked me on this, the mad 50-year old Instagram blocker. Ahh don’t block me 50 kid, I still like some of your songs. The older ones haha. King bless you all, Burger King.” — Conor McGregor via his official Instagram.

If you’re not familiar, Conor McGregor has experienced his own meteoric rise through Forbes’ annual Top 100 Highest Paid Athletes list. In 2016, McGregor broke into the prestigious list at 85th, but in just a year he had climbed all the way up to the 24th spot. This was just before his historic fight with Eddie Alvarez. With that taken into account, his growing Rolodex of endorsements, and the $100 million boxing bout with Floyd Mayweather, McGregor is set to go well beyond that number this year.