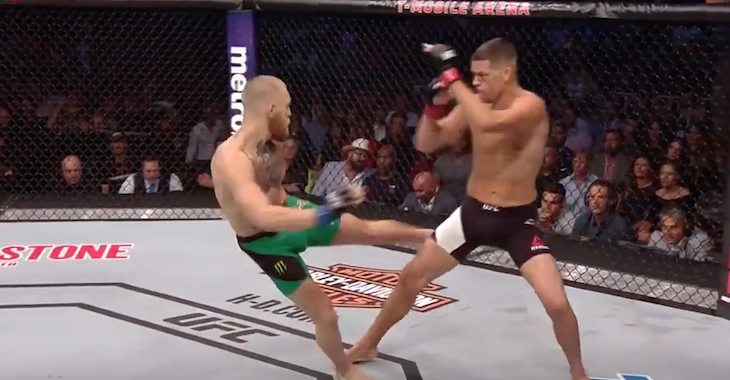 Going into UFC 202, where Conor McGregor hoped to avenge his UFC 196 loss to Nate Diaz, the featherweight champ and SBG Ireland head coach John Kavanagh did something they had never done before. They came up with a gameplan for Diaz.

In addition to coming up with a gameplan, McGregor brought in several lanky southpaw boxers, and Jiu-Jitsu ace Dillon Danis to prepare for Diaz. In total, McGregor estimated that his training camp cost $300,000.

The preparation paid off, and McGregor emerged from UFC 202 victorious, avenging his loss to Diaz, and silencing critics in the process.

On a recent episode of The MMA Hour, John Kavanagh reflected on not only the strategy for McGregor going into the fight, but also the major role leg kicks played in the fight.

“It’s been a chink in his armour for all of his career.”

“It was always going to be part of the game plan. So yeah, because we game-planned for this fight, which I’ve never really done before, I’ve never put together such a strong plan.”

“We looked back over at fights where he suffered (from the kicks). The (Rafael) dos Anjos fight is an obvious one. Just that kind of that boxing style, heavy on the lead leg, toes pointed in.

“We got a taste of it in the Artem fight and then we went out and did it again for the Nate fight.”