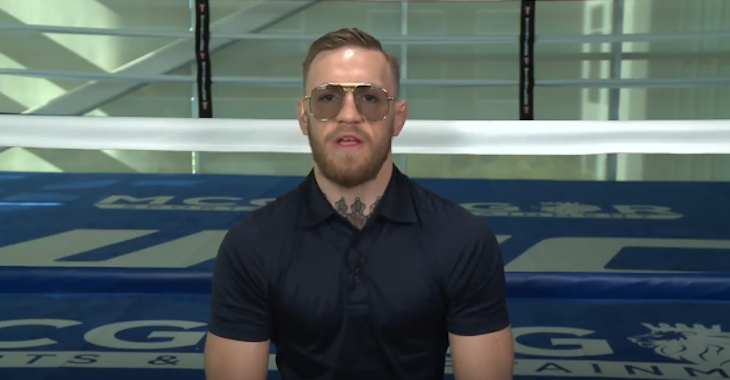 “I said [I’d win inside] four [rounds], but that’s me being humble,” the champ told Conan O’Brien (h/t MMAFighting.com). “I don’t believe he will even exit the first round, but I’m trying to be humble on national TV. So I say four — inside four.”

“I think the styles of opponents that Floyd has faced have moved in a certain way,” McGregor continued, elaborating on how he plans to put McGregor away “The boxing game is almost set in its way, I feel. Their feet are flat. They have no spring in and out. Compare that with a mixed martial artist, they can bounce in and out at a fast tempo. So I believe I will paint pictures in there that he has never seen or the boxing community has never seen before and that will cause him big trouble.” “I will go in and dismantle him at his own game. That’s what a true martial artist can do, they can adapt under any circumstance. Bruce Lee said, ‘be like water,’ and when the water enters a cup, it becomes the cup. That’s the philosophy I’m going into this contest. It doesn’t matter what ruleset or stipulations they try and put on me, I can adapt and overcome any situation. And that’s what I will do on Aug. 26.”

Do you think Conor McGregor can make good on his prediction and put Floyd Mayweather away early?