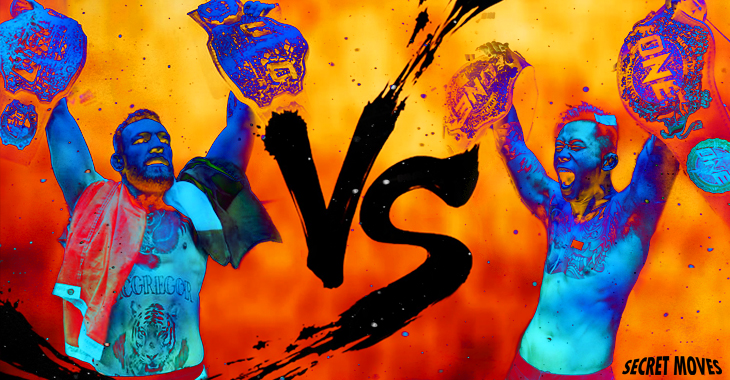 The year of the superfight is truly upon us. Whether they all go down or not, three giant fights between champions in different divisions are expected to fight each other. Whether this is the UFC’s big explosion like the death of a star, or their metamorphosis to survive in the future, it’s clear that things are changing. So, if we’re going to crack open the door to allow for epic fights like these, why not just kick it off the hinges? Let’s take down the political boundaries between organizations and have champions be able to fight other champions to really decide who are the top fighters on our humble spinning rock. Unfortunately, that’s impossible until some sort of MMA Ali Act is passed. However, there is no red tape on our imagination, so this is what we’ll explore in the very first edition of Fight Think.

The UFC is moving forward with the absolutely epic match-up between UFC light heavyweight champ Daniel Cormier and UFC heavyweight belt holder Stipe Miocic to decide the baddest man on the planet. Meanwhile, Bellator is conducting a year-long tournament complete with their own talent, the legend Fedor Emelianenko as well as some UFC veterans to crown their new heavyweight champion. If this was boxing, whichever two men that were left standing after their respective organizational smoke clears would logically fight each other. It’s a no brainer. How else do you even decide who baddest man on the planet is if you can’t even fight beyond your territory? Even Matt Mitrione admits he’d have to fight Stipe Miocic after he wins the tournament to truly prove he’s the best.

“No, I do not [think winning the Bellator world grand prix makes me the top heavyweight]. Stipe [Miocic] is the No. 1 guy in the world. I don’t think anybody can argue that at all. I think it would be really dope to have the chance to compete against him. If the Ali Act ever got passed, I think that would be really dope and I think it would be great for the fans. Then I find out, ‘Are you really that good or not?’” – Matt Mitrione speaking to MMA Junkie.

This fight was already supposed to happen, but now it probably never will. Daniel Cormier was expected to face Ryan Bader before Jon Jones threw a wrench in the plans. It was the infamous hit-and-run that resulted in Jones being stripped of the UFC light heavyweight title and punished with a lengthy suspension. Suddenly, Cormier found himself stepping into the fight with Anthony ‘Rumble’ Johnson at UFC 187 for the vacant title. Ryan Bader never forgot. At the UFC 192 post-fight press conference after Cormier successfully defended his title against Alexander Gustafsson, Bader and Cormier got into a heated altercation that nearly resulted in a fight right then and there. The two never ended up finishing their business and in two years Ryan Bader signed to Bellator and immediately became their light heavyweight champ.

Three years ago, a former Shooto bantamweight champion on a nine-fight win streak challenged the unbelievably dominant Demetrious Johnson for the UFC flyweight belt. This fight with Kyoji Horiguchi took Johnson all the way to the very last second of the very last round to finally submit the tricky and intelligent Japanese warrior. We all know that Johnson went on to break Anderson Silva’s title defense record and will potentially test himself against UFC bantamweight champ TJ Dillashaw next.

As for Kyoji Horiguchi, he won three fights back-to-back under the UFC banner after his loss to Johnson, but chose not to renew his contract. Instead, he left to fight in his homeland for RIZIN. After one win at flyweight, RIZIN wanted to provide Horiguchi with a challenge so they made him move up to compete in their bantamweight grand prix. He absolutely wrecked the entire tournament to be crowned champion and is booked to fight former Demetrious Johnson rival and UFC fighter Ian McCall at RIZIN 10. At this point in their respective careers, Horiguchi is 23-2 and Johnson is 27-2. A rematch between the two for some sort of interpromotional Japanese superfight title sounds like something MMA dreams are made of.

“It’s very difficult [to deal with Kyoji Horiguchi’s style]. I mean, he’s very fast and the Karate style is something I’ve never faced before. So, I didn’t want to be stupid and get knocked out. I had 25 minutes. I just took my time and I thought at the last second, I should try and finish it. […] He’s just tough to hold down and that’s what we worked on in this training camp: Hold him down, pass guard and submit him and we got it done. It took a long damn time, but we got it done.” – Demetrious Johnson in the post-fight interview with Joe Rogan at UFC 186.

When UFC featherweight champion Conor McGregor dealt out a Dragon Ball Z combination to defeat UFC lightweight champion Eddie Alvarez at UFC’s historic New York event, he cemented himself in MMA history forever. While a couple of legends have held UFC titles in multiple divisions, McGregor became the first to ever hold them simultaneously that night. It truly was a superfight ripped straight from the boxing playbook. However, you know what’s more super than two belts? Four.

Two days before the one year anniversary of McGregor’s achievement, Martin Nguyen from ONE Championship repeated his own ‘Champ Champ’ journey. Nguyen knocked ONE featherweight champ Marat Gafurov out in the second round in August of 2017, then did the same to Eduard Folyang that November to steal the lightweight title and become the first two-division champion in ONE’s history. It’s so rare that two prominent organizations would have double champs at the same time. A mega ultra fight between the two would be absolutely bonkers. Yeah, yeah, McGregor was stripped of his featherweight title long ago but no one ever beat him to take it so the lineal title still stands.

(For the title of the greatest welterweight of all-time)

Ben Askren has been the Bellator welterweight champion, ONE welterweight champion, and if you want to talk about his wrestling credentials, there is simply not enough space here. He recently retired undefeated in MMA, but with one caveat: A fight with greatest of all-time candidate, Georges St-Pierre. After coming back from a four-year hiatus, the veritable UFC welterweight deity continued his 13-fight win streak he left behind by moving up and submitting Michael Bisping to become UFC middleweight champion. Due to health complications caused by jumping divisions, St-Pierre vacated the title and his future is up in the air. What better time to finally sign Ben Askren for this superfight? No division would be held up, both men are on their way out of the sport but are still in their primes, and it looks like the fans actually want to see it. Aside from Tyron Woodley, who Askren has stated he’d never fight, this match-up would no doubt decide the consensus top welterweight of all-time.

“I’ve never said I’m retired, period. I’ve said that I’m retired with the caveat that if I somehow get to fight to prove that I’m No. 1 in the world, I will take that opportunity. I’m not gonna fight to be No. 3 or 5 or 7 or anything else. Just to be No. 1, that’s it. It’s not really a money thing, it’s a pride thing. There’s this other guy who was a very famous welterweight named Georges St-Pierre who doesn’t seem to have a dance partner right now and doesn’t seem to want to fight Tyron [Woodley] or Robert Whittaker. So I figure, he doesn’t want to get hit hard, I don’t hit that hard. So we might as well just get in there and get after it. If he needs a dance partner, I’m more than willing to do it. I’ll come to Montreal and fit the bill for him. We’ll fill out the Bell Centre.” — Ben Askren speaking to The MMA Hour.