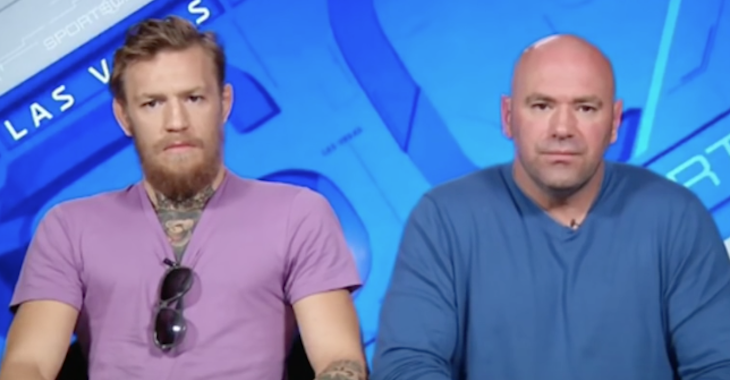 Earlier this week, rumors began to surface with respect to UFC lightweight champion Conor McGregor‘s next fight. Contrary to widespread expectations that his next bout will occur in the Octagon, these rumors suggest McGregor will once again compete in boxing, where he would take on a bona fide legend in Manny Pacquiao.

These rumors began with comments from Pacquiao himself, who claimed that he’s been in preliminary negotiations with McGregor and his team, and that they’re working toward a spring showdown.

Whether they are fact or not, these comments from Pacquiao and his team did not go over well with UFC President Dana White.

While White was all for McGregor’s blockbuster August showdown with Floyd Mayweather Jr., he doesn’t seem interested in letting McGregor continue to box.

“That would be weird because [McGregor] is  under contract with us,” White said of Manny Pacquiao’s claims at the post-fight press conference for the UFC’s stop in Fresno, California (h/t Trent Reinsmith of Forbes). “If that’s true, I will be suing Manny Pacquiao and whoever’s representing him. So, I’m assuming that’s not true.”

While McGregor has plenty of options in the boxing world – having been challenged by Pacquiao, Paulie Malignaggi, and even the retired Oscar De La Hoya – there is a widespread desire to see him back in the cage, where is career began.

Should McGregor return to the Octagon, his most likely opponent would be UFC interim lightweight champ Tony Ferguson, though Nate Diaz, welterweight champ Tyron Woodley, and even former welterweight and middleweight champ Georges St-Pierre also stand out as options.

Whatever the case, it seem like it will be a long and arduous process to get McGregor back in the Octagon. The Irish star is well-aware of his worth, and will likely not return for any old fight.