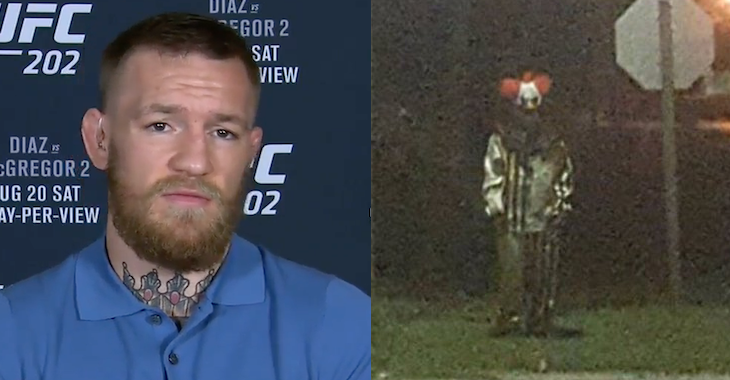 If you haven’t been keeping up with current events, there has been quite a few cases of some scary-looking clowns going around and literally freaking people out. Some have been harmless while others have gone beyond just scaring people and have resulted in arrests.

UFC featherweight champion Conor McGregor was asked in a Facebook interview on The LAD Bible page about the recent strange occurrences.

“I’ve seen people dressed up as clowns or something like that.” What would you do if one came up to you? “I would slap the head off of one (clown). You see some guy jumping out screaming in your face dressed in a clown mask? I’d slap the head off him pull the clown mask off and stick it up his ass! You know what I mean? What the f–k even is that? I don’t what the f–k even is that. Have people been killed or what? I haven’t heard that people have been killed. You’ve heard that maybe there’s stabbing and stuff like that but… I don’t know it’s f–ked up! I don’t know it’s f–ked up. Just don’t come near me in a clown suit. In fact, don’t come near me period. Come near me and I’ll slap the head off you anyway. But if you’re in a clown suit I’ll slap the head off you even more so.”

With Halloween right around the corner, you may want to choose your costume wisely with “The Notorious” around. Conor McGregor gets his chance to make history at UFC 205 in New York as he looks to become the first UFC fighter to simulatanesouly hold two divison’s titles with a win over Alvarez. Alvarez on the other hand will look to burst into superstardom with a definitive win over one of the biggest draws the UFC has ever had.

Who are you picking to win at UFC 205? Share your prediction with us in the comment section!