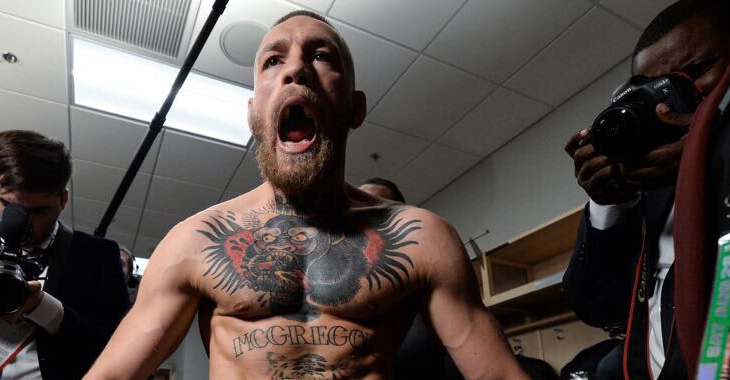 While it’s good for his bank account, some fans despise the idea of another Conor McGregor fight simply for the spectacle of it all. Maybe if he didn’t still hold the UFC lightweight title, they’d be more lenient. Some just want to see him back in the UFC, whether he defends his title or not. No question the organization needs a little McGregor boost, which is why these superfights are being put together. However, coach John Kavanagh may have found a solution. What if McGregor actually fights Floyd Mayweather in MMA, but has a ‘real fight’ later that same night?

“I’m kind of reminded of early last year when I was asked about the boxing fight and I was doubtful as anybody, and I actually went as far as to stupidly tweet that I’ll do the Irish river dance naked if Floyd steps in the Octagon. Now, I’m going to be honest, I’m practicing Irish dancing, and I’m getting nervous about that. In all seriousness, it’s a crazy world we live in. The fight that could never happen happened. And now this is a fight [in MMA] that can never happen, and it seems to be getting, I don’t know, there seems to be something forming there. I would absolutely love it.”

“Now, let’s be realistic here. If the fight was to happen, I would nearly be saying to Conor and pushing Conor to say, ‘Let’s book that two or three weeks before a real one’. Because we can go in and — I’d almost insist that in that fight Conor shoots a double leg early — because I’d be almost annoyed if he went in there and put him away quickly with MMA striking. We need to see jiu-jitsu in that fight. He needs to be in the mount slapping [Mayweather] about a little bit. So it would be, I think, such a straight, easy fight that we could train realistically for it and then do a competitive MMA fight on the backend of it. […] You could kind of do that one and fit it in on the night of his real fight.” — Coach John Kavanagh speaking to The MacLife.

A real elbow in a real fight. pic.twitter.com/9kZ7Opw8Zl

As Kavanagh himself said, the notion of this idea is ridiculous, but that’s what we all said about the boxing match between Conor McGregor and Floyd Mayweather that ended up actually happening. No question an MMA fight with the best boxer alive would go drastically different than their boxing bout, which is another reason why it’s hard to see Mayweather sign off on it. Keep in mind, his viral videos of him in the Octagon were basically just an advertisement for his sponsor Paddy Power. Still, it got people talking and they still are, which is how this whole thing started in the first place.