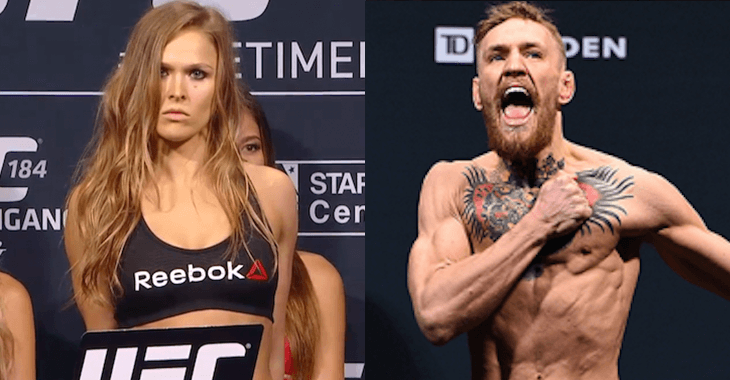 Earlier this month, it was announced that former UFC women’s bantamweight champion Ronda Rousey would be returning to the UFC after a year away from the Octagon following her brutal UFC 193 KO loss to Holly Holm which saw her suffer the first defeat of her professional MMA career.

Not only was it announced that Rousey was returning to the Octagon, it was announced that she would be fighting Amanda Nunes for the women’s bantamweight championship in the main event of UFC 207 on December 30th.

According to UFC President Dana White, should Rousey emerge from UFC 207 victorious, she will then move on to have a superfight with Invicta FC featherweight champion Cris Cyborg in the future.

On the heels of the announcement regarding Rousey’s return, UFC featherweight champion Conor McGregor, who is currently gearing up for his lightweight title fight with Eddie Alvarez in the main event of UFC 205, spoke in an interview with Sports Illustrated where he was asked what he would say to send Rousey words of encouragement ahead of her return to MMA.

“I wish Ronda nothing but the best, it’s good to see her back,” he continued. “Some people take defeat and losses a certain way. You see how some fighters take losses. I’m happy she is ready to go again and I wish her well.

“Go and shut these people up now. Go and get what you began back. I’m excited to see how it unfolds.”

While there was initially talk of whether Rousey or McGregor would headline UFC 205, the UFC’s first trip to the Madison Square Garden, Rousey wasn’t prepared to return for the event, and as a result Rousey’s fight with Nunes is expected to headline UFC 207, which will serve as the UFC’s New Year’s Eve card.

How do you see Rousey’s return going? Give us your predictions below PENN Nation!