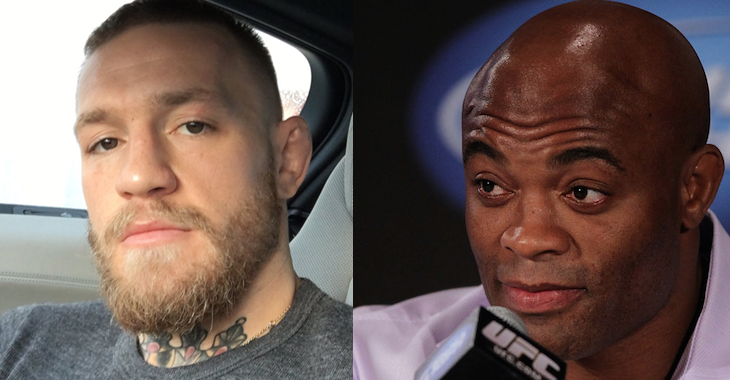 Earlier this month, middleweight legend and possible MMA GOAT Anderson Silva made waves by suggesting that, despite the massive weight disparity between them, he’d be interested in a catchweight super fight with Conor McGregor.

“Now that I’m old, I’m beginning to challenge everyone,” Silva told Globo TV of a bout with McGregor, who currently owns the UFC lightweight crown. “Oh, I want to beat this dwarf… what’s the boy’s name again? McGregor. It is not provocation. It’s just that I forget, I’m old. Old men know what it’s like. I have this urge to test myself against him. I think he’s a guy who has an unusual ability. I do not know if he would reach a weight of 81, 82 kg, which is the weight I can get to, but it’s a guy I’d like to test myself before I end my career. I think it would be a great fight for the world of fights and UFC history.”

Since then, Silva has been booked for a UFC 208 with fellow ranked middleweight Derek Brunson. During an interview in the buildup to this fight, Silva once again touched briefly on a fight with McGregor, this time explaining why it is that the fight interests him.

“I’d like to test myself against Conor because he’s an interesting martial artist,” Silva told MMAFighting.com of this potential showdown. “His stand-up game is an intelligent game,” he continued. “Not because he’s champion now, but for the martial arts challenge. I’d like to see how these stand-up techniques, his and mine, would mix, and how that would go.”

“But not to fight for a belt or anything like that. For the challenge, an interest, that thing about knowing how a fight like this would go.”

Silva then went on to explain that, despite fighting in a weight class 30 pounds above McGregor’s current lightweight home, he thinks he could meet him in the middle at roughly 176 pounds. His words:

Would you be interested in an Anderson Silva vs. Conor McGregor superfight? If so, how do you think the fight would go? Sound off, PENN Nation!