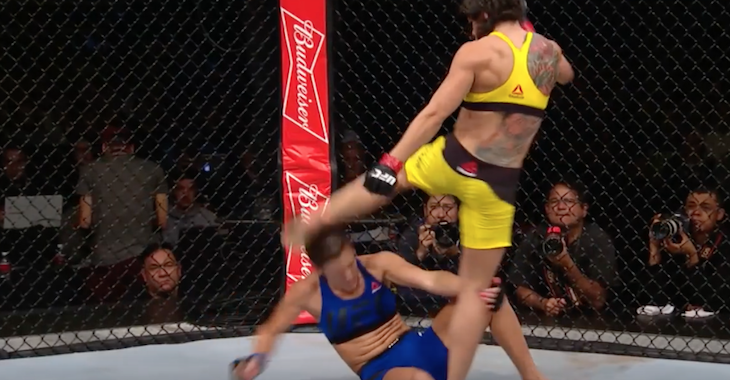 This past weekend on the main card of ‘UFC Fight Night: Sao Paulo’ on Fox Sports 1, top ranked women’s strawweight Claudia Gadelha stepped into the Octagon against Cortney Casey for a highly anticipated strawweight showdown. For Gadelha, the bout was a chance for her to return to the win column after dropping a unanimous decision to Joanna Jedrzejczyk back in July in a highly anticipated rematch. For Casey, the fight was an opportunity to extend her 2-fight win streak which had seen her defeat Cristina Stanciu and Ronda Marcos over the course of 2016.

Gadelha dominated the fight from start to finish, not only landing more significant strikes than Casey, but also landing 6 takedowns on Casey as she went 100% on her takedown attempts.

With that being said, there was quite a bit of controversy in the third round when Casey looked to draw Gadelha into her guard, and Gadelha threw a kick to the head of her grounded opponent that appeared to land clean. Casey reacted to the kick, holding her head and laying on the canvas as the referee intervened and gave her time to recover. Despite that, Gadelha was not docked a point, leading many to wonder why the referee didn’t take a point for the situation.

In a statement to MMAFighting, CABMMA COO Cristiano Sampaio explained why Gadelha wasn’t docked a point:

“Because the kick didn’t land, the athlete forged the injury,” Sampaio said in a statement. “Had she not done that, and not used that time to her benefit and rest, he would have deducted the point. Had the kick landed, Claudia could get two points deducted or being disqualified. (Casey’s) conduct was wrong and unsportsmanlike, which could even be interpreted by the referee as she was giving up on the fight. The point was not deducted because of her attitude. It was an atypical situation and (the referee) acted correctly under our interpretation.”

Interestingly enough, review of the footage shows that Sampaio is correct, and the kick didn’t land to the head of Casey, merely grazing the top of her ponytail, but not connecting with her head. Check out the footage below: