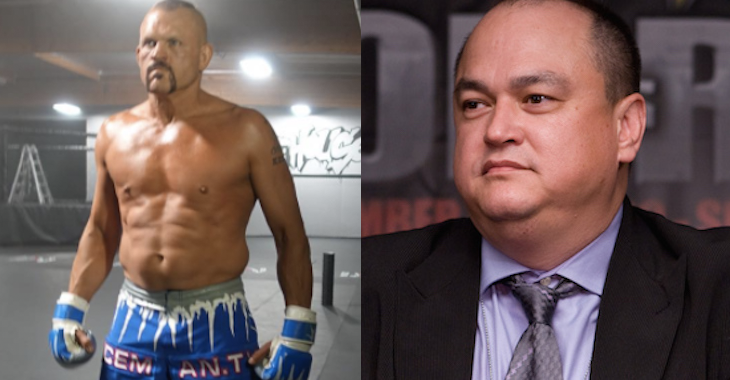 There has been some buzz surrounding a potential return to competition for former UFC light heavyweight champion Chuck Liddell.

Liddell has kept himself busy with training and looks to be in terrific shape. John Hackleman, who is a longtime coach of “The Iceman,” said that if it were up to him on a comeback, it would all depend on the matchup. When Liddell himself was asked by TMZ about where his head was at with a return to competition, Liddell didn’t give an answer with certainty as he said, “We’ll see.”

On Friday, MMA Junkie reported that Bellator President Scott Coker said that he and Liddell had a meeting over lunch recently in Los Angeles. Coker said that he spoke with Liddell about working something more along the lines as a Bellator brand ambassador rather than a competitive fighter for the promotion.

MMA legend and UFC Hall of Famer Royce Gracie is one of those who has been working with Bellator as a brand ambassador. Gracie has done his part as an ambassador in making appearances, meeting fans, and holding seminars on behalf of the Bellator promotion.

With the new owners WME-IMG buying the UFC for $4 billion last year, Liddell was let go as a part of the recent UFC layoffs where he held the position as the promotion’s vice president of business development. Coker said that he was unsure if Liddell was under any sort of contract or clauses that would not allow him to work with the UFC’s competition.

Do you think there is a chance that with his layoff from the UFC, we will see UFC Hall of Fame legend Chuck Liddell switch teams to help out Scott Coker with Bellator? Let’s get your thoughts in the comment section!