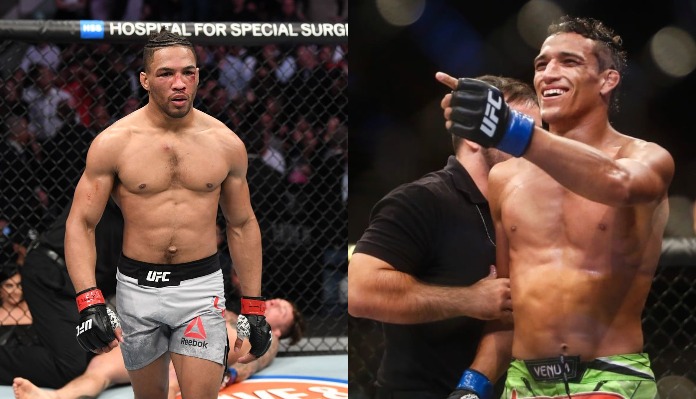 The highly anticipated main event will now be a catchweight bout, this after Lee failed to make the 156lbs weight limit on Friday.

Kevin Lee (18-5 MMA) will enter UFC Brasilia looking to build on the momentum of his first round knockout victory over Gregor Gillespie at UFC 244. That win snapped a two-fight losing skid for “The MoTown Phenom”, who had previously suffered losses to Al Iaquinta and Rafael dos Anjos.

Meanwhile, Charles Oliveira (28-8 MMA) is currently riding a six-fight win streak, his latest being a first round knockout victory over Jared Gordon in November.

Welterweights Demian Maia and Gilbert Burns will collide in the co-main event of UFC Brasilia.

Maia (28-9 MMA) will enter tonight’s event on a three-fight win streak, his latest being a submission victory over Ben Askren this past October.

As for Gilbert Burns (17-3 MMA), “Durinho” is currently riding a four-fight winning streak, this after scoring a decision victory over Gunnar Nelson in September.

Get all of today’s Results and Highlights below:

Kevin Lee vs. Charles Oliveira – Oliveira def. Lee via submission (guillotine) in Round 3
Demian Maia vs. Gilbert Burns – Burns def. Maia via TKO in Round 1
Renato Moicano vs. Damir Hadzovic – Moicano def. Hadzovic via submission (rear-naked choke) at 0:44 of Round 1

Who are you picking to win tonight’s UFC Brasilia main event between Charles Oliveira and Kevin Lee? Share your picks in the comments section PENN Nation!