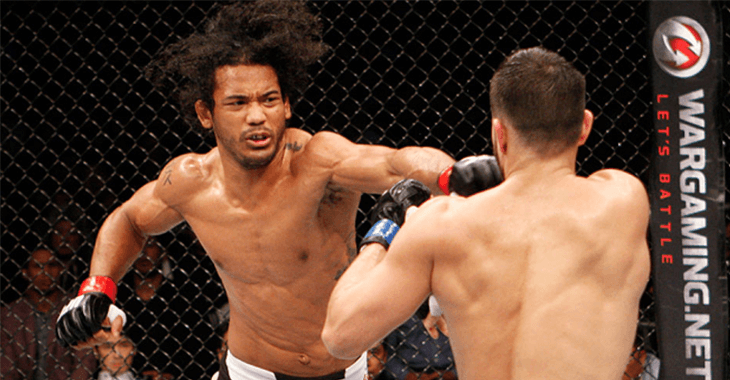 Former UFC lightweight champion Benson Henderson made a bold move to leave the UFC for Bellator for what he believes is a better overall package.

In doing so, Henderson said on The MMA Hour recently that his move is already reassuring him of the choice in terms of sponsor pay.

“For my last Bellator fight, I had one sponsor, and with that one sponsor, just one, I made just shy of what I made for the Reebok sponsorship,” Henderson said (transcribed by MMA Fighting). “But I am aware, I do know, that it’s going to take a while to build up those sponsors again. Sponsors in the UFC were at one point a very high dollar amount. You got paid quite a bit of money. After the Reebok thing took over, and all of the companies kind of heard about that, the value went down a lot.”

Henderson mentioned that the pay overall with sponsors changed when Reebok and the UFC struck an exclusive deal.

“Some sponsors are still wary of dropping the same amount of money they were dropping before, and that’s my job to convince them that I am worth it,” Henderson said. “Like, ‘no, I understand you guys are hesitant about sponsoring an athlete for this much money, but when you see the numbers, when you see freaking Spike TV pulling a 1.1 million peak rating, and there was [an NBA] playoff game that night — a playoff game that went into overtime, I think it was the (Oklahoma City) Thunder versus the (Golden State) Warriors, so that game definitely hit my target audience, males 18 to whatever the age is, that kind of hurt us on the viewership — but when they start seeing viewership, they start seeing the Neilson Ratings, 1.1, 1.2, 1.5, then they start changing their mind a little bit.

“So it’s my job to prove that I am worth it. I am worth this number, I am worth that number. But it’s a process. It’s not going to be easy, but I never was looking for the easy way out either.”

What are your thoughts on Benson Henderson’s situation in Bellator and the UFC’s deal with Reebok? Let us know in the comment section!