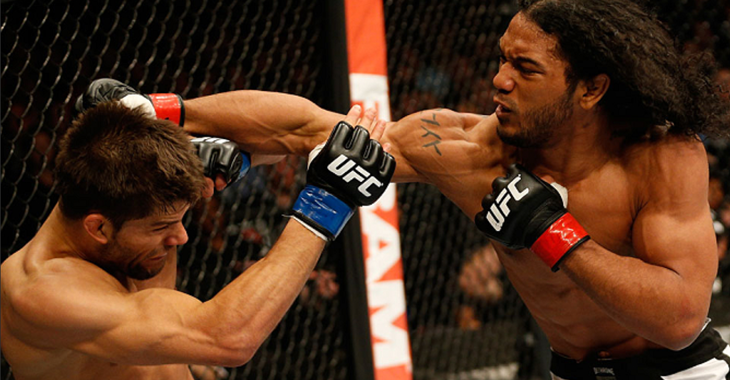 The news of Benson Henderson stepping away from a new contract with the UFC to sign with Bellator MMA is still big news in the world of mixed martial arts. The former UFC and WEC lightweight champion is looking to add a third MMA title to his list of accomplishments as he takes on Andrey Koreshkov for the Bellator MMA welterweight championship on April 22nd at Bellator 153 in Connecticut.

“I think Andrey has a lot of good kicks. He’s been working on his grappling,” Henderson said in an interview with MMA Mania. “I intend on leaving the cage with my hand raised and a new belt to add to my collection.”

“Smooth,” says that the expectations he puts on himself are far greater than anyone else that knows or follows him.

“The pressure I place on myself is above anything else, anybody else, any organization, reporter or interview. I expect to succeed, I expect to get my hand raised and I expect to dominate. I expect to be a world champion,” Henderson said. “It is there [pressure] in different scenarios. There’s always a first, but you have to go out there and do your thing.”

Although Henderson has never fought for the Bellator promotion, he says he is familiar with their culture with some teammates fighting for Bellator.

“For sure, it reminds me a little bit of my WEC days, being a little bit of a smaller organization and not just the three big letters, U-F-C,” Henderson explained. “I think the hardcore fans who know, and appreciate, what Bellator is will have an appreciation and dislike for what UFC does and have a strong liking to Bellator.”

Will Benson Henderson make a big statement with his first fight in Bellator MMA by taking the welterweight title? Share your thoughts on his fight against Andrey Koreshkov in the comments!