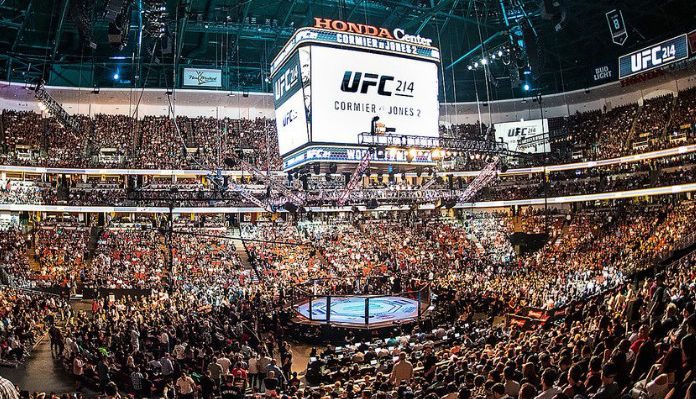 With 2018 closing out, news about the first UFC cards of 2019 is starting to leak. For example, we now know when are where the first pay-per-view of the year will occur.

On Jan. 26, the UFC will be heading back to the Honda Center in Anaheim, California for UFC 233, according to the Los Angeles Times.

The last time the UFC was at the Honda Center was UFC 214 in July of 2017. At the event, Jon Jones made his return to the Octagon where he knocked out Daniel Cormier. However, the fight was overturned to a no-contest when Jones was flagged by USADA.

Given that it is the first pay-per-view card of the New Year, the UFC may try to stack it and start 2019 off right.

Although there is no news of any fights that will be on that card, the Los Angeles Times is reporting it very well could be headlined by a T.J. Dillashaw vs Henry Cejudo super fight. Cejudo would most likely move up to bantamweight to take on Dillashaw for his belt. The fight could also signal the end of the men’s flyweight division in the UFC.

Dillashaw last entered the Octagon at UFC 227 in August, where he defeated Cody Garbrandt by knockout to defend his bantamweight title. It was a dominating performance. Just before Dillashaw defeated Garbrandt, Cejudo stunned the MMA world by defeating the longtime champion, Demetrious Johnson by split decision.

Since then, the two fighters have exchanged plenty of trash talk, and it seems as though the Anaheim crowd could well see them settle their score live.

Another wrinkle in this story is that on the same night as UFC 233, Bellator is putting on a massive show of their own. Bellator’s event is at The Forum in Los Angeles, which is about 35 miles away from the Honda Center. That card will be headlined by a heavyweight title showdown between Ryan Bader and Fedor Emelianenko, the two finalists in Bellator’s epic heavyweight Grand Prix.

It will be interesting to see how much the two cards occurring on the same night impacts the viewership for both events. The UFC and Bellator haven’t gone head-to-head with big cards in a while, but in January, they’re set to do so.

Which fights would you like to see added to the UFC 233 bill?