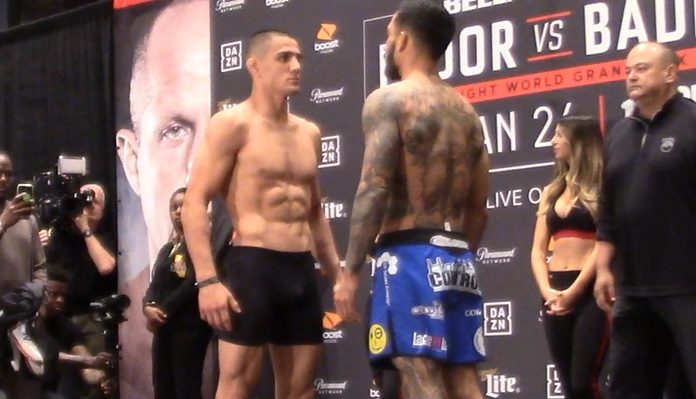 Perennial featherweight contenders Henry Corrales and Aaron Pico squared off in the co-headliner of tonight’s Bellator 214 event in Los Angeles.

Aaron Pico (4-2 MMA) entered tonight’s contest with Corrales on a four-fight win streak, with all four of those victories coming via first-round stoppages.

Meanwhile, Henry Corrales (17-3 MMA) was also sporting a four-fight win streak prior to making the walk at The Forum this evening.

Corrales had defeated Andy Main via third-round TKO in his most recent effort at Bellator 208.

Tonight’s highly anticipated Aaron Pico vs. Henry Corrales fight only lasted just over a minute. With that said, those sixty-plus seconds were filled with action.

Aaron Pico dropped Henry Corrales with an uppercut in the early seconds of the fight. Corrales was able to recover and get back to his feet where he proceeded to trade wild punches with Pico.

Eventually one of those wild punches, a right hand to be exact, connected. That punch sent Aaron Pico crashing to the canvas.

It was a spectacular knockout win for Henry Corrales. Check out how the pros, including UFC commentator Joe Rogan, reacted below.

Who would you like to see Henry Corrales fight following his impressive victory over Aaron Pico at tonight’s Bellator 214 event? Sound off in the comments section PENN Nation!