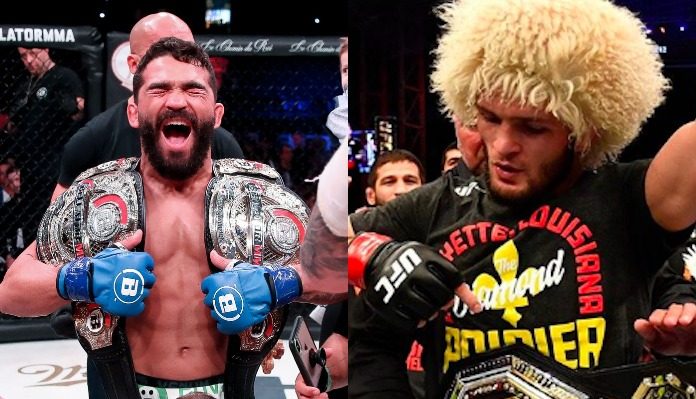 Khabib Nurmagomedov is 28-0 and has only lost one round in his entire MMA career. Yet, Bellator featherweight and lightweight champion, Patricio ‘Pitbull’ Freire believes he can be the one to hand the Russian his first loss.

Although they are in two different promotions, Freire hopes he can get the chance as he knows he wouldn’t just beat Nurmagomedov, but knock him out.

“Khabib is very tough, has phenomenal wrestling and sambo, but he has a huge deficiency on the feet so I can catch him,” Patricio ‘Pitbull’ said to MMA Fighting. “Nothing is impossible. I think he’s very tough, 28-0, but another fighter from Rio Grande do Norte, [Gleison] Tibau, put on a very tough fight with him, and I think there’s a path to beat him. I believe we can do it. If my hand lands, and it would land, it’s over.”

Although no man has come close to solving the riddle that is Khabib Nurmagomedov, Patricio ‘Pitbull’ says the Russian has been the same fighter his entire career.

“He has the same fight pattern since his first fight,” Freire said. “He backs his opponent against the fence, moves, and shoots to the leg. No one has ever tried… Maybe someone did try to land a knee, but I don’t remember anyone getting close to landing. Iaquinta was doing well against him, moving well on the feet, but he was closing the distance the wrong way. I think I can close the distance better.”

The chances of this fight happening are slim to none, but Patricio ‘Pitbull’ hopes he gets a chance to fight Khabib Nurmagomedov one day.

Who do you think would win in a fight between Patricio ‘Pitbull’ Freire vs. Khabib Nurmagomedov? Sound off in the comment section, PENN Nation!