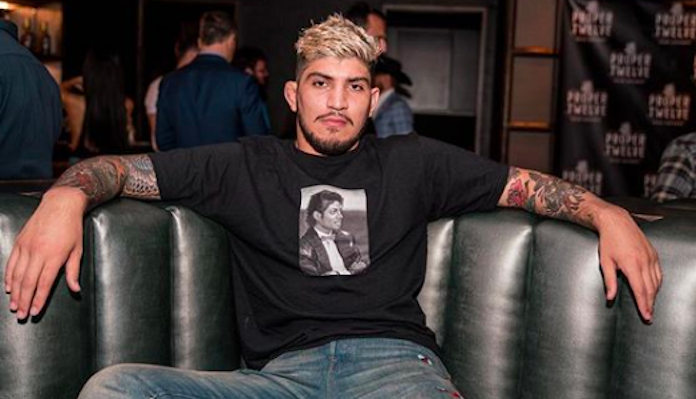 On September the 10th, Danis called out the Youtube brothers Jake Paul and Logan Paul on Twitter. He commented, “F**k the Pauls.”

The Youtube star responded by implying that Dillon Danis’ flame, Savannah Montano had hooked up with one of them. He responded, “Savannah did.”

As a result, Danis decided to get payback by posting a picture of himself with Paul’s wife and fellow Youtube star, Tana Mongeau with the caption, “I teabagged your wife.”

Whilst it is still unclear if Jake Paul married Tana Mongeau as part of a publicity stunt, his alleged wife was not impressed with Dillon Danis’ comments and gave her two cents on Twitter.

“I’m rly tryna stay outta this fight shit but ur dizzy bro. u waited in line after five fans and took a pic. ur girlfriend in my DMS. leave me outta this,” said Mongeau.

Jake Paul continued his tirade aimed at Danis and corroborated his wife’s comments. He also took aim at Dillon Danis’ career and said his only highlight is being Conor McGregor’s friend and getting punched by Khabib Nurmagomedov.

dillon danis peak was when he got punched by khabib

Meanwhile, both Jake Paul and his brother have built a fighting career of their own. Jake Paul boxed out his beef with Youtube star and KSI’s younger brother, Deji. Despite being bloodied up, Jake Paul took home the victory.

His older brother, Logan Paul fought Deji’s older brother, KSI in 2018, but the boxing match finished with a majority draw. The two will rematch on the 9th November 2019 at the Staples Center, Los Angeles. The rematch is being promoted by boxing veteran Eddie Hearn. The two fighters have a combined Youtube following of over 40 million, and an eclectic mix Youtube and fighting celebrities will be in attendance for the rematch. It is unlikely Dillon Danis will be anywhere near the boxing ring unless he hopes to initiate his very own UFC 229 McGregor vs Nurmagomedov cage-side fight.