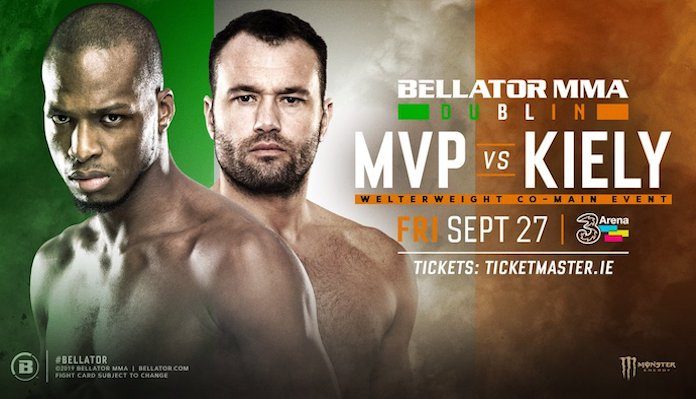 On Friday afternoon, amid the Bellator 227 and Bellator Dublin festivities in Dublin, Ireland, British knockout artist Michael Page returned to the cage in hopes of rebounding from his first pro MMA loss: a knockout at the hands of the former welterweight champ Douglas Lima. Page’s opponent in this crucial return to action was his heated rival, Richard Kiely.

The Bellator Dublin card, of which Page vs. Kiely was a part, aired live on Friday afternoon on the Bellator MMA app. Unlike the Bellator 227 portion of this event it will not air on tape delay later tonight.

This one didn’t last long.

At once, it was clear that Page had a significant speed advantage. From the get-go, he zapped his foe with crackling shots at range, and interspersed these impacts with plenty of the showboating we’ve come to expect from him.

In fact, after a middle finger from Kiely, Page was hit with a point deduction for taking his showboating too far. Moments after this point deduction, Page put a decisive end to things, flattening his foe with a violent flying knee.

That was all she wrote.

In his post-fight interview, Michael Page claimed that he barely trained for the fight.

“He kept ducking his head, it was an obvious shot,” he said of the fight-ending blow. “I hardly even trained for the guy, I’ve been on holidays.”

Page then concluded by calling for a rematch with the man he recently lost to, Douglas Lima.

“Douglas Lima, I have so much respect for you, but I’m coming back,” he said.