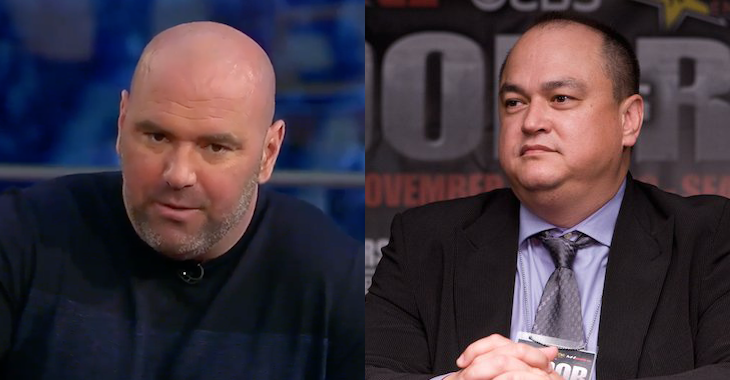 Bellator MMA and the UFC are now throwing down in the courtroom after a lawsuit was filed on Wednesday in the U.S. District Court for the Central District of California, according to Sporting News.

Bellator MMA’s lawsuit against the UFC stems from a class-action lawsuit that was filed against the UFC in 2014 by a group of mixed martial arts fighters that claimed the UFC was guilty of violating antitrust laws. The UFC’s lawyers filed subpoenas to obtain contracts and financial information from fighters competing for other MMA organizations, particularly Bellator’s confidential contracts and financial information, in an effort to prove that the UFC is treating their fighters the same, if not better than the other competing organizations.

The lawsuit filed by Bellator MMA on Wednesday rejected the UFC’s request for Bellator’s financial and contractual documents.

Bellator stated in an affidavit that they have already “produced in excess of two thousand pages of responsive documents” for the UFC’s antitrust case.

Bellator additionally stated that “the subpoenas improperly seek trade secret and other sensitive information protected from disclosure; they are overbroad and unduly burdensome; and this information cannot be adequately protected by the litigants’ stipulated protective order.” Bellator MMA President Scott Coker stated in an eight-page court document that Bellator “is not a party” in the antitrust case. Coker added that giving their confidential information to the UFC would cause great harm to Bellator and other mixed martial arts organizations and would give the UFC a greater competitive advantage.

“Accordingly, disclosure of Bellator’s confidential information pursuant to the Nevada subpoena would give Bellator’s largest and most powerful competitor a significant and unilateral advantage that would negatively harm Bellator and, in my opinion stifle competition in the MMA industry,” Coker stated to conclude the court document.