Shortly following Kevin Lee’s unanimous decision loss to Al Iaquinta in tonight’s UFC on FOX 31 main event, “The Eagle” took to Twitter where he delivered the following message to “The Motown Phenom”.

Congratulations @ALIAQUINTA
I know how strong you are, that's why I was waiting for your fight. #truetalker

“Congratulations @ALIAQUINTA. I know how strong you are, that’s why I was waiting for your fight. #truetalker”

When tonight’s main event decision was delivered it was clear that Kevin Lee was shocked and upset by the ruling.

With the disappointing loss, Kevin Lee has now gone 1-2 over his past three fights. The good news is that the young Detroit native still holds a career record of 10-4 in the UFC. 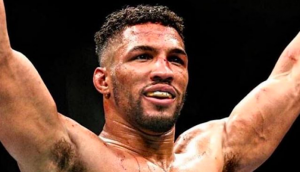 As for current UFC lightweight champion Khabib Nurmagomedov, the undefeated Russian is still awaiting his punishment from the Nevada State Athletic Commission in regards to his involvement in UFC 229’s now infamous post-fight brawl.

After defeating his bitter rival Conor McGregor via fourth-round submission, “The Eagle” proceeded to jump out of the octagon and attack the Irishman’s teammate Dillon Danis (watch that here).

Do you think we will ever see a future fight between Khabib Nurmagomedov and Kevin Lee? Sound off in the comments section PENN Nation!