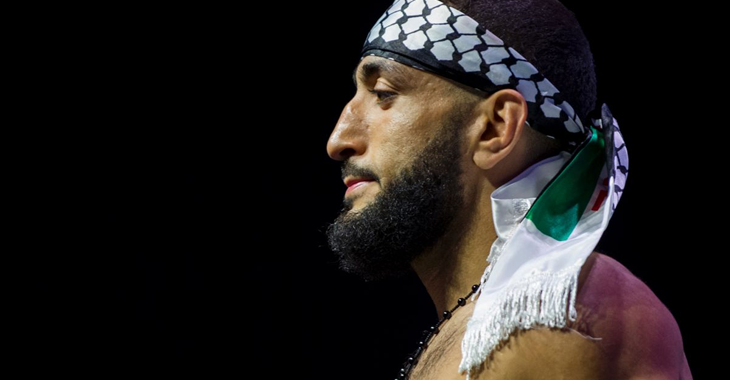 Last night, the UFC returned to Sydney, Australia with an exciting, 13-fight event. One of the big winners of the event was main card welterweight fighter Belal Muhammad, who took out dangerous veteran Tim “The Dirty Bird” Means via split decision.

In the moments after this win, which stands out as one of the best of his career, Muhammad took an opportunity to call out red hot welterweight contender Colby Covington. Covington has recently made headlines not only for his big October win over Demian Maia, but also for his controversial comments on Brazil and its people. In the eyes of Belal Muhammad, those comments are not ok.

“I definitely got someone in mind [for my next fight],” Muhammad said in his post fight interview with Dan Hardy. “There’s a little coward I saw earlier this week by the name of Colby Covington, out here talking trash about other people’s countries. I don’t like that, man. I’m from Chicago, dude. We’re both 170 [pounds]. Meet me in the cage. Because if I see you on the street you’re going to the ICU.”

With his decision defeat of Tim Means, Belal Muhammad extended his current win streak to three straight, as he has also recently picked up decision triumphs over Randy Brown and Jordan Mein. His most recent loss occurred in November 2016, when he was knocked out by Vincent Luque on the undercard of UFC 205. This loss was preceded by a win over Augusto Montano, and a decision loss opposite Alan Jouban in his action-packed UFC debut. Muhammad is now a strong 13-2 in sum.

Would you be interested in a welterweight showdown between Colby Covington and the rising Belal Muhammad? Join the conversation in the comments section!