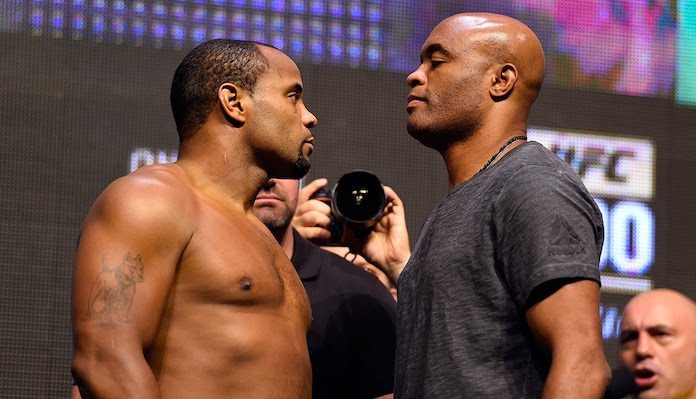 Earlier this week, UFC heavyweight and light heavyweight champion Daniel Cormier suggested that fighters like Anderson Silva and Jon Jones should not be mentioned when debating the greatest fighters in MMA history on the basis of the failed drug tests in their pasts.

“Demetrious [Johnson], Georges St-Pierre, these guys have none of these bad things tied to their names and these are the guys I should share the conversation with,” Cormier said on Slip n’ Dip Podcast. “I’ve never had any negatives and I’ve never had to go in front of any commission and explain why my test came up messed up. That’s why I should be in the conversation because I’ve done things the correct way.”

Speaking to CBS Sports, Anderson Silva responded to Daniel Cormier excluding him from the Greatest of All Time debate.

“It’s very interesting because I take the fight against Daniel [on two days’ notice at UFC 200 in 2016] and I had been training absolutely nothing for months and I had surgery already in my body and I took the fight in saving Daniel money because Jon Jones failed the test,” Silva said. “But it’s very interesting Daniel talking about that because when you have problems, everybody has problems. When you talk about people, you need to be careful because you never know about your life. You never know about your future. I think Daniel is very lucky and completely lucky because never beating Jon Jones, of course, because Jon Jones in my opinion is the best fighter at 205 [pounds]. When I took the fight, Daniel didn’t do nothing. He was completely lucky. He was more lucky because I didn’t take the fight for five rounds and just three, and he don’t do nothing but just hit the ground and use his weight. Why are you talking? Why does Daniel talk? I respect, but Daniel don’t have to talk about that because I’m very sad about that. That’s the first time I saw this news. I respect Daniel, but when he is talking about me and Jon Jones, he’s completely crazy because Jon Jones is the best fighter. I tried to make everything perfect inside the cage for my fans. I don’t know… but it’s OK … this is Daniel Cormier.”

Do you think Anderson Silva belongs in the GOAT conversation?