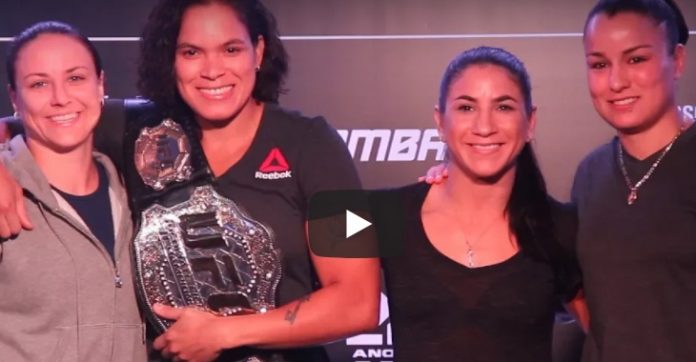 Amanda Nunes utilized some nasty low kicks to batter the legs of her opponent early and often throughout the course of their championship bout.

At the end of round four Pennington turned to her corner and said she was “done” but her coaches were having none of it and forced her back out for the fifth and final round.

In round five Amanda Nunes took the fight to the floor where she unleashed some savage ground and pound which forced the referee to mercifully step in and call a stop to the action.

Here is how the MMA Community reacted to Amanda Nunes’ impressive title defense and Raqel Pennington’s cornes controversial decision to force their fighter to participate in round five.

What a great fight so far ladies!! @RockyPMMA vs @Amanda_Leoa #ufc224 @ufc

"I'm done". Raquel Pennington is telling her corner that she's done but her corner tells her to go back out there to continue to fight. #UFC224

And now this fight is incredibly uncomfortable. https://t.co/B95bRT36Za

Amanda Nunes gets the TKO stoppage in the fifth round. Raquel Pennington wanted out after the fourth but her corner sent her back out there so she could get bludgeoned and her nose mangled in the fifth. That's just awful#UFC224

Terrible corner. She should not have even gotten up for that 5th round.

Amanda Nunes defends her title for the third time, finishes Raquel Pennington via TKO in the fifth round. Pennington told her corner before the fifth she was done, but corner talked her into going back out. Dominant win by Nunes.

Another finish. 13 fights, 11 finishes tonight at UFC 224. No idea how the UFC is going to decide who wins the bonuses.

They should have never let her go into the 5th round like that.

Raquel Pennington's corner should be ashamed of themselves. There was no need for Pennington to even get off the stool and start the 5th round to begin with when she clearly told her team she was done. #UFC224

Nunes now tied with Andrade for most wins in the UFC women's division (9).

If Pennington was getting a flat purse (no win/show), does her corner stop the fight earlier? I’d like to think so. No other explanation for that recklessness. The corner works for the fighter. If she wants out, let her out. Live to fight another day.

Look at the concern from Torres, cleaning up Pennington while she's still in the cage after Pennington's cornerman wouldn't let her out. What a contrast.

Is that what she said? I couldn’t hear the audio?? https://t.co/DWdHXQy2UJ