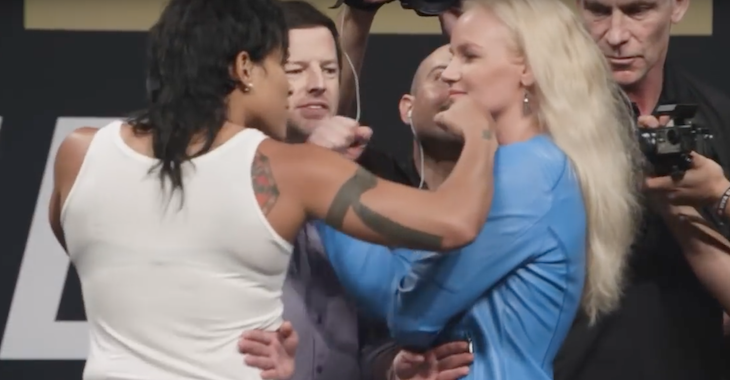 Last week, at the UFC Summer Kickoff press conference, UFC women’s bantamweight champion Amanda Nunes was joined onstage by her UFC 213 opponent, Valentina Shevchenko. The pair will scrap July 8th for Nunes’ belt in a highly anticipated rematch with even higher stakes this time around.

While the pair certainly talked quite a bit of trash during the press conference, it was the staredown that followed which made headlines. When the two met in the center of the stage after the press conference ended for a stare down, sparks flew. Amanda Nunes seemingly escalated the situation unprovoked, however now she is looking to set the record straight.

During a media luncheon this week, the champ explained that Shevchenko actually touched her cheek first, however it was hard to see from the camera angle streaming to viewers online:

“You guys have never seen me do that before,” Nunes said. “If she didn’t touch me, nothing is going to happen. Imagine in that situation, a lot of emotions involved, somebody touches your face. It’s not cool. I kind of responded in that moment. It was more than she did to me, but I reacted.

“You never know, especially how you feel in that moment and somebody talks so much shit about you and touches you, your face. At that angle, you guys couldn’t see it that well, but I felt it. And she knows she did it.”

While there is certainly no love lost between these two, Nunes has no problem communicating with Shevchenko to remind her that she was the victorious one the first time around:

“If I have to respond over and over again, letting her know I beat her, I will do it. It’s not personal for me. I will get this done the day of the fight.”