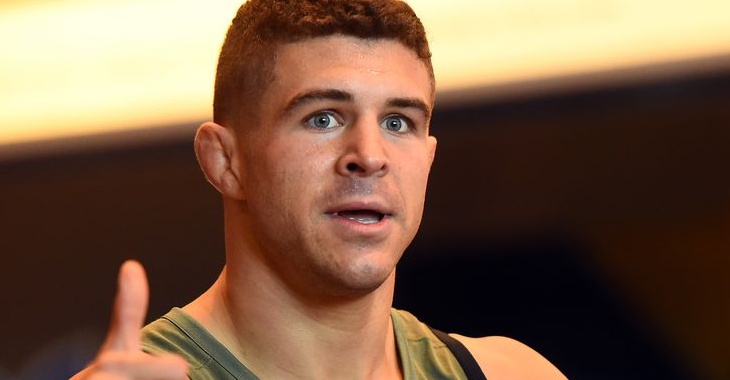 Not many fighters have been so vocal about how unhappy they are with their UFC contracts after a fight as Al Iaquinta has been after his last few fights. But it sounds like “Ragin'” Al has negotiated a deal that he can fight happily under. He explained when talking to ESPN.com:

“After my last fight in April, I put a number in my head, and I wasn’t going to fight for anything less. They almost got me in December. I accepted a fight against Paul Felder, but it wasn’t the number I had. I kind of rushed into it. So I pulled out of that fight. I stuck to my guns. One day, I got on the phone with [UFC matchmaker] Sean Shelby and said, ‘Listen, USADA is coming to my office to test me. This is unacceptable. I said I was going to pull myself from the USADA program. And they came back with the number I wanted.

I signed a new four-fight deal. They gave me a new contract on the second fight of my old deal, I don’t think they do that for many people. All these fighters kind of take what’s given to them. Very few know their worth. I still think I’m worth a lot more, but this is a step in the right direction.

In the UFC’s eyes, this is not a four-fight deal, because they can cut me at any time,” Iaquinta said. “Now I can walk away any time. I got what I wanted for this fight, and whatever happens after this is whatever. I’m on a one-fight contract every time. Whatever happens, if I want to do it again, I’ll do it. But I don’t have to do this to pay my bills. It’s enjoyable. That’s why I’m here, I’m the best in the world, and I just need a platform to prove it,”

Al Iaquinta holds a 13-3-1 record and is currently riding a hot five-fight win streak with four of those five wins coming by way of knockout or TKO. His most recent being his devasting knockout over Diego Sanchez. Iaquinta was also a finalist for season 15 of The Ultimate Fighter but fell short against Michael Chiesa. The Serra-Longo product, Iaquinta has gone 8-1 since that fight which includes a win over top 10 contender, Kevin Lee.

Iaquinta mentioned that he was supposed to fight Paul Felder in December, well that is still the case! Just not in December… Iaquinta and Felder are now set to meet at UFC 223 in Brooklyn, New York on April 7th.

The UFC 223 card is headlined by two title fights, one being a rematch between UFC Strawweight champion, Rose Namajunas and the woman she defeated to earn the title, Joanna Jedrzejczyk. Then the main event pits rivals, Khabib Nurmagomedov and Interim Lightweight champion, Tony Ferguson against one another. This is the two’s fourth time being scheduled to fight.