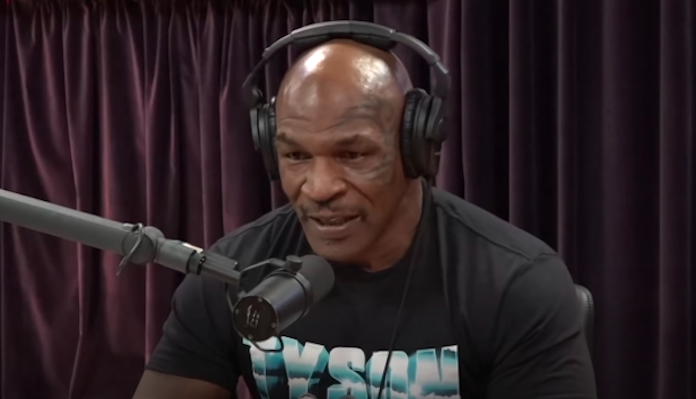 Tyson, who is gearing up for an eight-round, heavyweight exhibition fight with fellow boxing legend Roy Jones Jr., was a guest on a recent episode of the Joe Rogan Experience podcast.

During his appearance, Tyson opened up on the process of getting back into tip-top shape, admitting that finds the experience of training and fighting to be… well… we’ll let him explain it (via MMA Mania).

“It’s orgasmic sometimes,” Tyson told Rogan. “What does it mean when fighting gets you erect? Well that’s how I’d get when I was a kid. Sometimes I’d get the twinkle.”

While Tyson is clearly enjoying the experience of preparing for a fight again, he’s been very forthright about the struggles of doing so at 54 years of age.

The heavyweight boxing legend also discussed the possibility of fighting again once his exhibition bout with Roy Jones Jr. is in the rear-view. He conceded that it’s possible, explaining that he’s motivated by the prospect of raising money for charity through his comeback.

“We don’t know what the future holds, but we’re just looking forward to having fun and a purpose, a reason,” he said. “Hey, I’m not interested in a title, I’m just interested in fighting for the title of giving. It feels soul-cleaning for some reason. Doing it for myself doesn’t do it for me no more.”

After listening to his conversation with Joe Rogan, how do you think Mike Tyson will perform in the ring in his comeback?