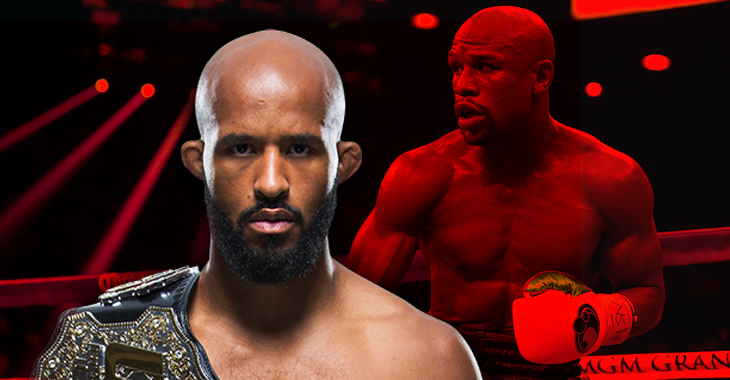 In just a matter of a couple of days, it was revealed by Dana White that Floyd Mayweather was in talks with the UFC. Demetrious Johnson and a slew of other fighters were frothing at the mouth in order to welcome him to the Octagon, but directly after that, Mayweather squashed the news and said it’s not happening. Of course, this same back-and-forth occurred during the negotiations for his boxing match with Conor McGregor, so you never know where the truth actually is until something happens or it doesn’t. None of that seems to matter to the ultra dominant UFC flyweight champ, who is daring Mayweather to actually follow through with this thing and meet him in the cage.

“I think [a fight with Floyd Mayweather] would go very well for me, obviously. I’m very well-rounded. It’s mixed martial arts. I would even do a handicap. I won’t even grapple with him. I won’t even go to the ground at all. I’ll get him in the clinch, bang up, hit him in the liver, kick him in the liver, take out his legs and work him. I found out that news from my management team. They were like, ‘Dude, Floyd Mayweather’s coming to the UFC. Call him out and let’s get this fight.’ I was like that’s your job, my job is to train and go out there and win the fights.”

“[All striking. No takedowns] 100 percent [I would beat Floyd]. Yeah, of course. You have the clinch, there’s kicks, there’s elbows, it’s mixed martial arts. I come from one of the great coaches — Matt Hume, Brad Kertson — and my skill sets are well-rounded. I’d probably get after that liver. I’ll have to get after that liver. Beat him up in the Muay Thai clinch because he likes to clinch a lot. You see it even in his boxing, when he clinches, once we initiate that clinch, I’m gonna throw a knee right to that liver. Yeah, Floyd, come over here and beat up the smallest guy in the UFC. Come try your hand, try to beat up the smallest guy.” – Demetrious Johnson speaking to TMZ Sports.

Demetrious Johnson is even offering Floyd Mayweather the safety of knowing that there would be no grappling in their potential mega fight. Of course, to many on the MMA side of things, this looks to be an expertly crafted mouse trap. Johnson’s strategy for Mayweather seems to be similar to how he dispatched Olympic gold medalist and Golden Gloves boxer, Henry Cejudo. The idea of this fight is absolutely ridiculous, but that doesn’t stop us from wanting it even more now.