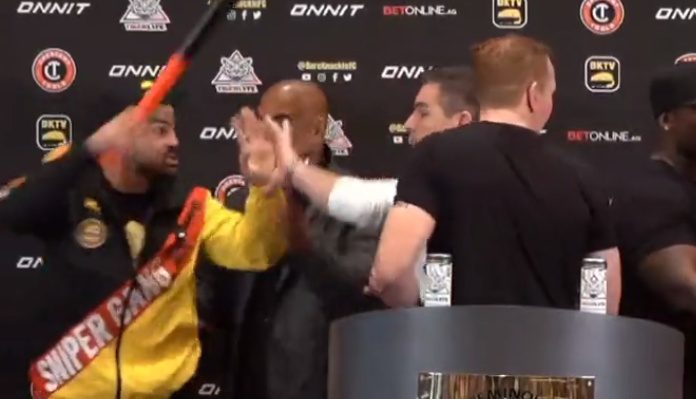 Mike Perry and Julian Lane had their press conference for their BKFC bout this weekend. During the event, ‘Platinum’ pulled out a bat during a scuffle with his opponent..

The scuffle wasn’t the first time that the two sides clashed in public. In December, Perry was shown on the broadcast as a guest commentator after his singing to the promotion. Lane threw a water bottle at the former UFC talent and insulted him. Almost immediately, Perry jumped into the crowd and began brawling with Lane.

BKFC quickly made the bout official, with our own Chris Taylor breaking the news. The pair were set as the main event for ‘KnuckleMania2’, the card is expected to be one of the biggest events of the year for the promotion.

Earlier today, the promotion held the event’s first press conference as a part of fight week. It didn’t take long for it to get out of hand. The bad blood carried over from their first encounter, and the two sides spent the entire time arguing. However, the conference turned from a roast to a near-brawl, as Perry pulled out a bat.

Where did that come from ⁉️ Mike Perry pulls a bar outta thin air at #KNUCKLEMANIA2 press conference. pic.twitter.com/Lep5U61rZP

‘Platinum’ pulled out the bat and threatened his foe with it. Luckily for Lane, Perry was quickly wrangled by BKFC staff and stopped the situation from getting any worse.

The bout against Lane will be the first BKFC fight for Mike Perry. The fan-favorite was released from the UFC last year after suffering four losses in his last five outings. While this is his BKFC debut, he did fight for Triller Triad Combat in November 2021, defeating Michael Seals.

Lane, on the other hand, is 2-4 in BKFC to date. He makes his return after his last outing in October 2021. He was on the losing end of a unanimous decision against David Rickels.

What do you think about Mike Perry pulling out a bat at BKFC’s press conference?