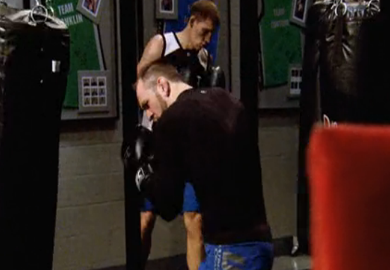 The Ultimate Fighter returned to FX on Tuesday night with the eighth episode of the season – “Bag of Tools”. New Zealander Dylan Andrews, who fights out of Gold Coast, Australia, claimed a majority decision win over Zak Cummings of Kansas City, Mo.

Andrews, 15-4-1 in mixed martial arts, used his strong grappling to out point Cummings, 15-3, in only the second decision of the season, capturing Team Jones’ third win of the competition.

Also in episode eight, one of the most highly anticipated and exciting Coaches Challenge to date. Held at ‘Dig This’ in Las Vegas, the coaches’ faced-off in three different competitions while driving excavators. Team Sonnen coach, Chael Sonnen, pulled off a come-from-behind win in the final seconds of the challenge – after having led the first half of the course – to claim the $10,000 prize and eternal bragging rights over Team Jones coach, Jon “Bones” Jones.

The Wild Card fight was reintroduced this season, providing an opportunity for fighters who have lost in the preliminary fights to get back in the competition. Coaches Jon Jones and Chael Sonnen were given the opportunity to make their own selections, choosing Bubba McDaniel and Kevin Casey, respectively. Fighters who lost their preliminary fight by TKO were not eligible for the Wild Card bout.

The series resumes next Tuesday, March 19, on FX at 9 p.m. ET/PT (check local listings for Central and Mountain Time). In that episode – “The Wild Card” – A fighter calls out a competitor to fight in the next round. Both teams unite for a Thanksgiving feast. Two preliminary losers, McDaniel and Casey, then battle for a chance to get back in the competition when they throw down in the Wild Card fight. Then, UFC President Dana White reveals the quarterfinal match-ups.