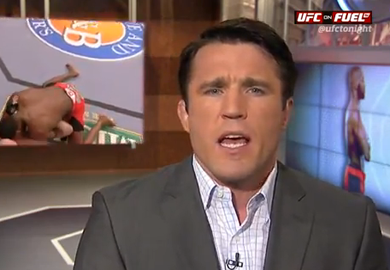 Chael Sonnen is a more than just a UFC Tonight analyst and fighter, he’s also a talented poet. In fact, Sonnen wrote a poem for Jon Jones that shows exactly what he’s got in store for him at UFC 159.

I got a call one day from Dana, he said ‘Chael, I’m putting you to work.’
‘You see, I overpaid for this light heavy, who I now realize is a jerk.’
‘He’s been winning fights, but not with brains or with brawn.
‘And his matches and his one-armed cartwheels are making the whole crowd yawn.
‘I mean, nobody’s coming to see him in living rooms or in bars.
‘Why don’t you send this guy to Cirque de Soleil, or Dancing with the Stars?’
He handed me his wallet, his ATM card and pin number too.
He said, ‘Chael, whatever’s in the account, take it, it’s all for you.’
I thought for a moment and I said, ‘I’ll tell you what, Uncle D.
‘For you and the fans, this one’s on me.’
So I went and did some homework, I got some tapes of his fights.
I suggest you all give them a try, if you’re having trouble sleeping at night.
They tell me he’s good, but I know that can’t be true,
I saw him get armbarred by Vitor, and he’s 52!
He’s so boring he made Machida fall asleep.
The snoozefest he had against Rashad, or beating up on Bonnar, who’s older than God?
Look, here’s the truth, believe me it is.
Don’t even mention Ryan Bader, he lost to Tito Ortizz!
Jon, I’m coming to New Jersey, because I’ve got a job to do.
I’m a fully-loaded cannon, boy, and I’m pointed right at you.
A little advice, go get in your car and hit another tree.
Do whatever you gotta do to stay away Jon, you don’t want to fight me.