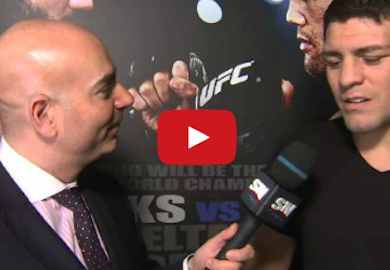 “Maybe [UFC] want me to Johny Hendricks. Take an a** whooping. Right to your face, bro. Worse than tonight, because you got your a** whooped all four rounds. I seen it. I seen your little amateur style. I’m ready to fight. I’m ready to fight the right fight.

“Trying to get a fight this year. Talked to Dana [White], hardly, but he knows my mindset. He knows where I’m at. Behind the scenes here [in Dallas] everyone knows what’s going on. That’s what’s up. Me in a title fight. I need a real fight. Let the fans have what they want to see. That’s why I’m here.

“[Hendricks] should never have opened his mouth around me. We don’t have no beef, though. I like Johny. I think he’s a nice guy, but he tried to get loud with me, I get loud with him back. It’s all business. It’s a good fight.”