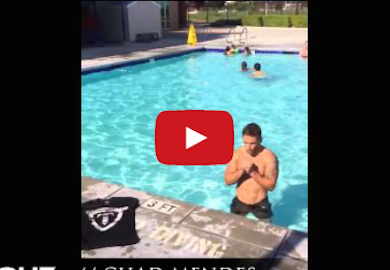 A few year’s back, BJ Penn, The Ultimate Fighter season 19 coach and multiple time UFC champion, went viral with a video of himself doing an impressive jump out of a pool.

Today,Chad Mendes, a Team Alpha Male trained UFC featherweight contender, showed off his own pool hops and paid homage to ‘The Prodigy’ in the process.

Had to show @bjpenndotcom up yesterday at the pool! Haha what u guys think?? 3ft plus a backflip! http://t.co/OAa3DMf5Uc