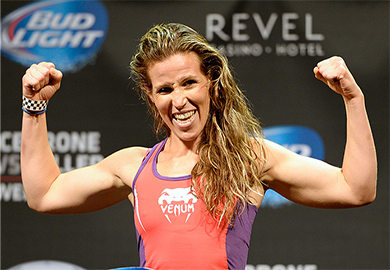 Leslie Smith is a killer.

Jessamyn Duke may have an impressive physique, but if you cannot keep your opponent a safe distance away then the reach is pointless. Smith did a great job at closing the distance and for every shot she took, she countered with two of her own. Smith eventually backed Duke up against the cage-wall and picked her apart with a vicious flurry of shots that would finish anybody.

After realizing all of her punches weren’t getting through, Smith grabbed the clinch and smashed her knee into the head of Duke. Smith then landed two or three body shots and Duke started to teeter. Smith brought her attack back to the head, then back down to the body and that is when Duke sunk down.

Duke simply turtled up and waited for the referee to call off the fight. After being pulled away by the referee, Smith ran back to her corner with tears in her eyes to celebrate her victory.

Leslie Smith def. Jessamyn Duke by way of TKO (Punches) 2:24 of Round 1