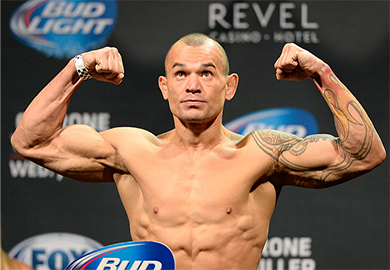 Last time Pat Healy fought in New Jersey (UFC 165) he lost to Khabib Nurmagomedov by way of unanimous decision. Tonight’s result was no different, and he has yet to pick up a win since January 2013 in Strikeforce.

Gleison Tibau looked to be in another league at the start of the bout. Healy’s reach was negated by the fact that his shoulders were boxed and this allowed Tibau to tee off on him at will. Tibau’s momentum started to fade toward the end of the second round, and it spilled into a dogfight in the final five minutes.

Healy was spent in the third round, but still tried his hardest to finish the fight inside the distance. Tibau absorbed everything Healy was throwing and eventually landed a takedown to lock-up the decision victory.