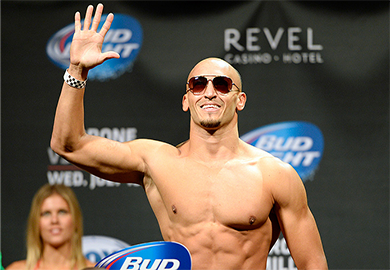 The opening fight of the Fox Sports 1 preliminary portion of the card kicked off with an unfortunate injury. Sanders injured his leg after absorbing a leg kick from Cedeno in the first strike of the fight and it was downhill from there for Sanders.

After throwing the leg kick, Cedeno caught a body kick and countered with a huge punch that dropped Sanders. Sanders was unable to transition off of his back due to his injured leg and the remainder of the round saw Cedeno pepper him with shots.

After the horn sounded signifying the end of the round, Cedeno popped back up to his feet and walked to his corner. Sanders, on the other hand, almost fell down as soon as he stood up. His corner had to help him back to his corner and it was no surprise when he said he could not continue when the doctor asked.

Yosdenis Cedeno def. Jerrod Sanders by way of TKO (Fighter Retirement) 5:00 of Round