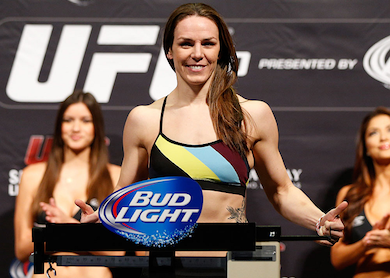 The ladies had the honor of closing out the preliminary bouts tonight with a bout between Alexis Davis and Jessica Eye. Eye was looking to redeem herself in the eyes of the public after mixup of her failed drug test in her last octagon outing, but she will have to wait until next time to do that.

Both Eye and Davis opened up the bout with close encounters and brutal shots, but the pace slowed down halfway through the first round. Even though the pace slowed down, it was still enjoyable to watch how methodical both ladies were in their approach of attack.

The fight was even while standing, but Alexis Davis was able to land takedowns and control the fight on the ground. Davis landed a takedown in rounds one and two and Eye was not able to get back to her feet after them. When she was taken down, Eye was barely able to work off of her back and did not land any significant strikes from there either.

In the third round, Eye was able to land multiple shots from within the clinch and gained momentum with the crowd. She would not follow up with it, though, as she constantly reset her stance.

Alexis Davis was awarded the split decision victory after fifteen minutes of action and she is now undefeated inside the octagon. After the bout, Davis asked for the next title shot.