UFC 170 Results: Assuncao Gets Decision Win Over Munhoz After Fifteen Minutes of Action 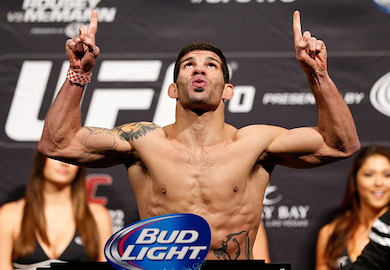 Pedro Munhoz walked into the octagon undefeated tonight and he faced a great challenger in Raphael Assuncao. Munhoz shone as a dominant force in RFA, but he seemed a bit nervous tonight in his octagon debut.

Raphael Assuncao cut off Munhoz’s combinations with a right-counter and effectively controlled the center of the octagon. Munhoz did a great job at chopping at the leg of Assuncao with painful leg kicks. Whenever Munhoz would get within striking distance, he would land his impressive right hand but Assuncao would answer with two or three punches of his own.

This fight saw the full fifteen minutes of possible action and it was clear Assuncao dominated while standing. Assuncao dominated throughout the third and final round and locked up the victory after a takedown with ten seconds left in the fight.

After this fight, Raphael Assuncao is now riding a six fight winning streak.