UFC 170 Results: Thompson Continues to Impress, Knocks Out Whittaker in Round 1 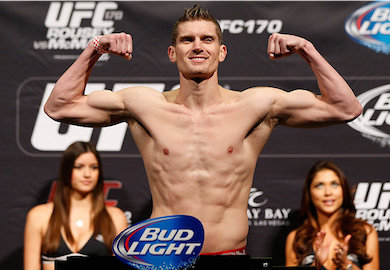 Thompson seemed to have been one step ahead of Whittaker throughout the entire first round. Whenever Whittaker would throw a cross, Thompson already started to side-step it a split-second before hand. Thompson aggravated Whittaker by constantly changing levels, causing Whittaker to block the wrong part of his body as Thompson landed a kick.

Due to his karate stance, Thompson’s hands were constantly left low. Whittaker was able to land a jab here and there, but he rarely followed up with more. He tried to follow up after landing a jab late in the first round, but Thompson made him pay for it in the worst way.

Thompson set up a right cross with a left hook and dropped Whittaker on his bum. Whittaker popped right back up but was still groggy, so Thompson stayed heavy on the attack. The ground and pound was simply too much for Whittaker to handle, so referee Mario Yamasaki called a stop to the fight.

Stephen Thompson def. Rober Thompson by way of TKO (Punches) 3:43 of Round 1