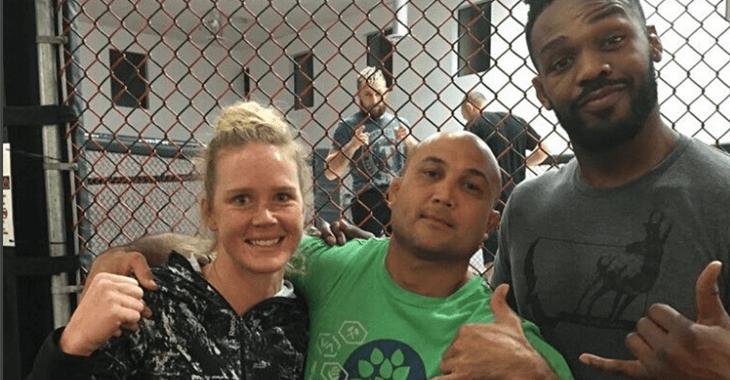 BJ “The Prodigy” Penn’s recent announcement to come out of retirement for a run at the UFC featherweight title has had fans on the fence on Penn’s return to the Octagon. While Penn has had the highest of highs throughout his career, he has struggled in his recent years in his bouts in the Octagon.

At 37-years-old, “The Prodigy” has become a student of the game once again under the tutelage of one of the greatest MMA camps in the world at the JacksonWink MMA Academy. This alone is getting fans of Penn excited of what is to come.

Greg Jackson spoke with MMA Junkie on how Penn became a part of their camp and talked about the potential in the UFC Hall of Fame legend fighting again in the UFC.

“He said, ‘I’ve been thinking about a run at it,’” said Jackson recalling on BJ’s phone call that came around Christmas. “I said, ‘That’s an awesome idea.’”

Penn has intentions on fighting at 145 pounds again and has the goal of becoming the only fighter in UFC history to win a UFC title in three separate weight divisions.

“I stayed up for a couple of days putting together a plan, and that’s kind of how it happened,” Jackson said.

“He’s such a talented and great athlete, once he finds himself and finds his love for it, I think he’s got a good two or three more years in him,” Jackson said. “Why not? What do we have to lose?”

“Performances due to information limitations and morale limitations, don’t matter to me at all,” he said. “What I look at is context and relevance within that realm. The performances don’t matter, because the potential is there.”

Penn said recently on the MMA Hour with Ariel Helwani that he told Jackson if at any point he feels that he should not be fighting and simply doesn’t have it anymore, to just let him know.

“I just have one word for him: talented,” Jackson said. “His sense of how he can find rhythm, how he sees fighting, there’s a reason he’s one of the greatest fighters. If he’s happy and productive and pushed mentally, I think he’s going to do great things.”

Jackson has been giving Penn nightly homework assignments, according to MMA Junkie. The assignments are made to make Penn think of certain fighting positions more creatively, and how certain techniques will translate into the bigger picture of combat.

“I think of it as another step in his evolution,” Jackson said. “I don’t think he’s rehabbing anything. I think he’s just beginning to evolve again. He’s no any more of a challenge or less of a challenge than anybody else. It’s just another challenge.”

While Penn would love to fight Nik Lentz at UFC 197 on March 5, it seems Lentz does not want to accept the offer from the UFC Hall of Fame fighter after making his own demands. No opponent or date has been set by the UFC for BJ Penn’s return to the Octagon, but fans are anxiously awaiting to hear what is next for “The Prodigy.”