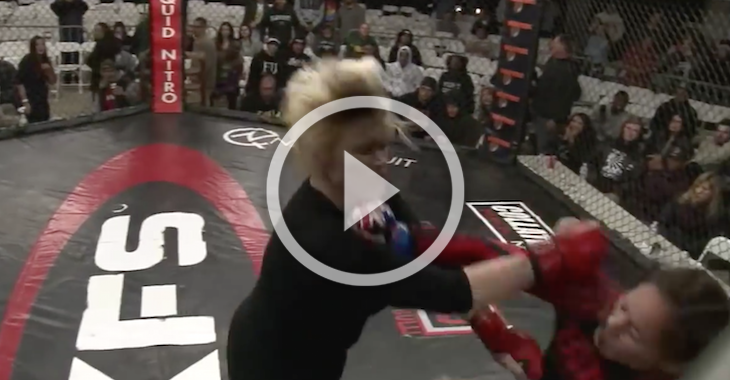 So remember that video of the ‘soccer mom’ looking fighter who got knocked out quick? Well the owner of the promotion has come out and is defending the decision to put in a fighter on such short notice and no experience.

“I actually thought this would have been a bigger deal 6 months ago the way we seem to have so many “FANS” out there, but I am not naive in the fact that sooner or later a hater or two would jump on to our YouTube account and make something of nothing.

“Let’s strip the names and gender away and take an objective look around the world of MMA… A 0-0 fighter debuted against a 0-2 fighter and the knockout was vicious. Does this not happen on every level of MMA short of the UFC? Of course it does. Now let’s add back the players real slow and see why there is nothing wrong with the equation and we can look across the board at promotions and sanctioned events all the way up to the big leagues and see that having a fill-in opponent happens quite a bit. Ilima Macfarlance who makes her Pro debut is a terrific amateur fighter, Katie Castro who at the time is 0-2 is a not so terrific fighter, but a willing and game competitor…Ilima’s opponent pulls out, she has family that has flown in from Hawaii and across the country and we all have a decision to make. It’s a cold evening so the fighters are wearing a top and bottom Katie unfortunately did not have a politically correct top/bottom for the viewers out there, hence the term Soccer Mom but, she is agreeable to step in last minute. Do we look to make a fight happen with the resource that is available or do we cancel the fight…

“First person we ask is her Trainer is he accepts the fight, then we ask Katie if she accepts the fight. We then get her pre fight with the doctor, wrapped up and they fight. Ilima wins by knocking Katie out and that is it. If we were not in San Diego, no one would care. If we did not have tons of talent that has come through our show no one would care. But in the end 6 months later and now everyone cares.”