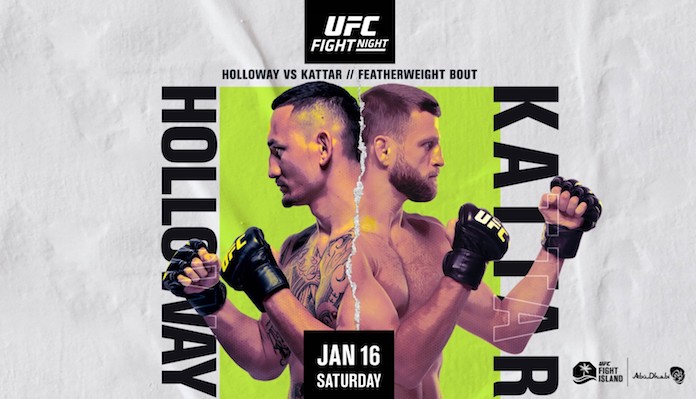 Holloway (21-6 MMA) will be looking to avoid the first three-fight losing streak of his career when he squares of with Kattar. ‘Blessed‘ is coming off of back-to-back decision losses to reigning featherweight champion Alex Volkanovski. Prior to those setbacks, the Hawaiian had defeated Frankie Edgar by unanimous decision at UFC 240.

Meanwhile, Calvin Kattar (22-4 MMA) will enter UFC Fight Island 7 on a two-fight win streak, his latest being a decision victory over Dan Ige this past July. Prior to outpointing the Hawaiian, Kattar was coming off a sensational knockout victory over Jeremy Stephens.

Brown (22-17 MMA) will be returning to action for the fist time since May, where he suffered a TKO to Miguel Baeza. Prior to that setback, ‘The Immortal‘ was coming off of back-to-back knockout wins over Diego Sanchez and Ben Saunders.

Meanwhile, Carlos Condit (31-13 MMA) returned to the win column in his most recent Octagon appearance, defeating Court McGee by unanimous decision. Prior to that victory, ‘The Natural Born Killer’ had suffered five straight defeats, including three losses by was of submission.

Get all of today’s ‘Holloway vs. Kattar’ live results and highlights below:

Alessio Di Chirico vs. Joaquin Buckley – Di Chirico def. Buckley via KO (head kick and punches) at 2:12 of Round 1

Punahele Soriano vs. Dusko Todorovic – Soriano def. Todorovic by TKO at 4:48 of Round 1

Who are you picking to win tonight’s featherweight main event between Max Holloway and Calvin Kattar? Share your thoughts in the comments section PENN Nation!