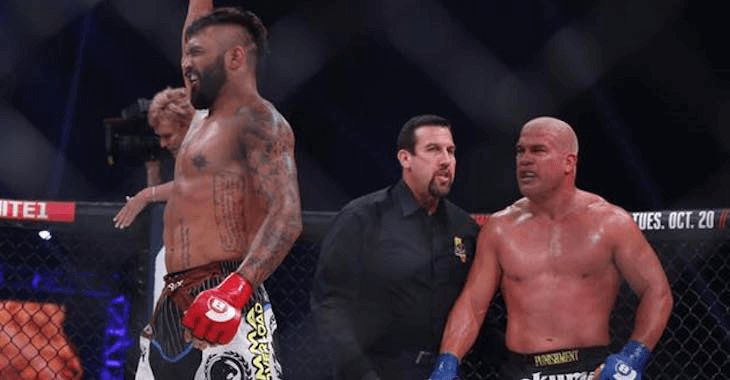 Bellator and GLORY showcased the best of their promotions on Saturday night with the spectacle that was “DYNAMITE 1”. Tito Ortiz and Liam Mcgeary headlined the event with a Bellator Light Heavyweight Championship fight. For the first time in nearly nine years, “The People’s Champion” Ortiz had the opportunity to capture gold. Unfortunately for him, Mcgeary is as game as they come.

Mcgeary endured Ortiz’s takedowns and attempt at ground and pound but ended up getting caught in a slick reverse rear naked choke. Fans expected a reason or two from Ortiz as to why he lost, but he offered no excuses.

“I can’t take anything away from Liam. He fought the best I can give. I went there and fought and the guy slipped it (inverted triangle) in— We’ve been defending triangles,” Ortiz admitted during the post fight presser. “I was pulling out of those long limbs. I tried to pull out, but he was the better man.

“We defended triangles. We defended all the positions. I got away from the armlock. I mean, I was going to let him break my arm before anything. I was not tapping. I was pulling, pulled out, and came back down.”

Do you think Ortiz’s time in the cage is done or does he still have enough fire and momentum to make another run at the gold? Share your thoughts in the comment section below!