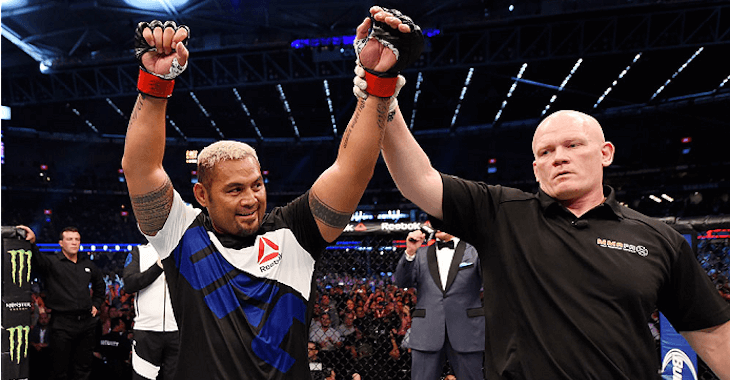 At 41 years old Mark ‘Super Samoan’ Hunt is without a doubt a legend of the sport, and one of the most beloved fighters.

Hunt is coming off a 1st round TKO win over ‘Bigfoot’ Silva at UFC 193, and is currently gearing up for his ‘UFC Fight Night: Australia’ main event fight against Frank Mir.

Hunt spoke to Submission Radio to discuss the bout, and how he hopes to use it as a stepping stone to getting a title shot by the end of the year.

“I asked for Overeem or JDS for this fight but I wasn’t allowed. And you know, I have to fight Frank Mir. He’s just as accomplished as me and was a world UFC champion,” he said. “So if beat Mir, then I can probably get a Top-5 guy and then probably I can begin my bidding for a world title shot hopefully. So hopefully by the end of the year maybe, if I won both fights.”

Currently heavyweight champion Fabricio Werdum is booked to fight Cain Velasquez at UFC 196 in a highly anticipated rematch, however Hunt could be knocking on the door of a title shot with two wins this year.