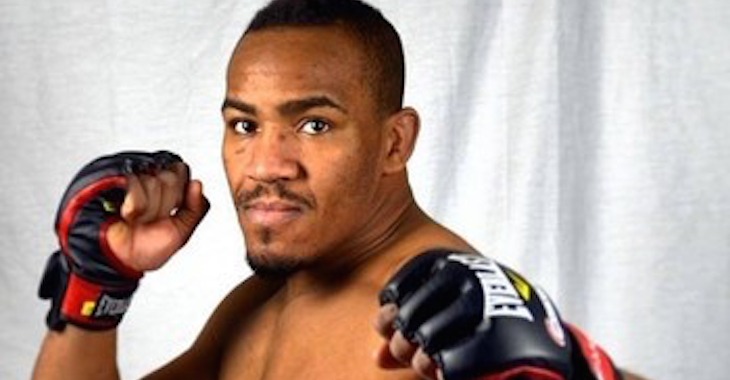 The mixed martial artist known as “Da Gun” will step into the cage this weekend for his fifth professional fight at Global Proving Ground (GPG) 21, streaming live on GFL.tv.

At only 23 years old, he is already a veteran of both Bellator and World Series of Fighting. Despite his relative youth, though, Outlaw is not lacking for life experience.

“Da Gun” has faced down obstacles outside the cage far more intimidating than any opponent he could face inside of it.

Who is Sidney Outlaw?

At surface level, Outlaw is normal guy from North Philadelphia. He grew up in a rough area, though his mom always stood by his side as his biggest supporter.

“She did almost everything for me, if I ever need anything she is right there. She’s really loving, really protective. (She’s) really proud of me, always kept me motivated.” he said.

His biggest supporter sent him out to the suburbs for high school in Souderton, Penn. At this time he discovered the world of MMA.
“My sophomore year I heard about this thing called UFC. The only thing I wanted for Christmas was a yearly membership to Renzo Gracie PA,” he recalls.

“My first favorite fighter was Rampage. As I got more involved in it, I really loved Georges St Pierre. He was an average sized human being and he was taking out monsters. There was something different about his spirit and heart.”

Outlaw’s mother found a way to get him the martial arts membership he desired. His interest turned to passion, even obsession. He continued training throughout high school and, when graduation came, he had the opportunity to go off and wrestle in college. Instead, he chose to chase his dreams and enter the world of professional fighting.

Outlaw set out for N.J. where he hoped to train with top-level fighters and begin his ascent towards the top.

“It didn’t really turn out the way I expected,” he says in hindsight. “I didn’t really have enough money for anything. I was homeless for a little while. My pride got in the way and I didn’t tell anybody.”

Instead of turning back and heading home to Philadelphia, Sidney decided to stick it out. “I’d rather be outside in N.J. homeless than go back to my mother a failure,” he says.

Outlaw continued training full-time, the same way any top-level fighter would. But while other fighters journeyed home to the suburbs and climbed into bed at home, he stayed in Trenton, sleeping in parks. “I was very homeless, training everyday. The same type (of training) as Frankie Edgar, I tried to keep up.”

“It sucked because you couldn’t sleep, (there’s) bugs crawling in your mouth, the seasonal changes. If (I) am with somebody, what am I going to bring them to the park I’m sleeping in? It really, really, really sucked.”

“I would rather die than go home a failure.”

Rather than weighing himself down with layers of negativity, Outlaw derived a unique drive from his circumstances.

“I was very focused on making it. It made me know what I really want. Every time I thought about going home I (couldn’t). I would rather die than go back home a failure. I can’t do that. Little by little things changed.”

Sleep deprivation wasn’t Sidney’s only problem while homeless. “I got shot at, I got jumped. I got robbed. I was sleeping and two kids younger than me robbed me.”

Even before his martial arts training began to pay off financially, it started paying off on the streets.

“When I got shot at (MMA helped) because it made me run very fast. When I got robbed, (MMA) helped me handle pressure. It could go one of two ways. I can be relaxed, do (what) they want and I don’t get shot, or I can try to impress someone and I can get shot, go out with a bang,“ he says of the hard times.

Light in the Tunnel

Finally, things began to look up for Outlaw. He won his professional debut in Cage Fury Fighting Championships (CFFC) then followed it with another win in the Ring of Combat (ROC) promotion.

Then he got the call to fight in Bellator, where he took a unanimous decision over talented fighter Mike “The Irish Cannon” Bannon.

His career suffered its first speed bump when he fought his fourth pro fight in the WSOF. Complications between his manager and the promotion left him unaware he was even fighting until a week out from the event.
Outlaw had not been watching his diet carefully, and was forced to undergo a drastic, rapid weight cut.

“It was a horrible experience. Maybe one day I can go back and become a champion. If they wanted me to do it again tomorrow, I’d try my best.”

Outlaw took an important lesson away from that experience; he had to take his diet seriously at all times.

“I’ve got to give that guy credit… he did his job. The only way somebody can beat me is if I beat myself,” he says of the fight.

Outlaw has moved on from his first professional loss, and now looks ahead to his fight at GPG 21 this weekend. He wants to bring the fight to his opponent just as he has always brought the fight to life.

“I love pressuring guys. I love it. I like reacting off of their reaction to me pressuring. I like initiating the attack to see what they do. I am going to make it a very entertaining fight.”

Outlaw is very confident in his skillset and truly believes that with his diet issues behind him he can be one of the very best fighters in the world. He works with world-class coaches like Ricardo Almeida and John Daneher, among others. He also benefits from a host of talented training partners. Sidney frequently trains with Bellator champ Liam McGeary, UFC light heavyweight Corey Anderson, and UFC lightweight Edson Barboza, to name a few.

“I am very blessed. I am able to do anything. I can do any aspect (of MMA). My wrestling and jiu jitsu is going to be world class. My clinch work, ground and pound, everything is going to be there.”

Speaking on his dreams in the sport, Outlaw said, “I want to make sure everybody knows who I am in a good, positive way. Hopefully I can inspire some little kids that want to be gang bangers. Show them that you ain’t got to do all that to be tough, you can be a positive role model. That’s one of the things that inspire me. If I’m great at something, people will look up for me. When I say great… I don’t want to be a contender, I want to be a champion.” Sidney concluded the interview with a simple thought he wanted to share with fans. “Let everybody know I love my mother,” he said.

It’s unlikely his opponent can bring him anything more threatening than the obstacles he has faced down in life. No matter what happens inside of the cage, “Da Gun” ultimately stands victorious.