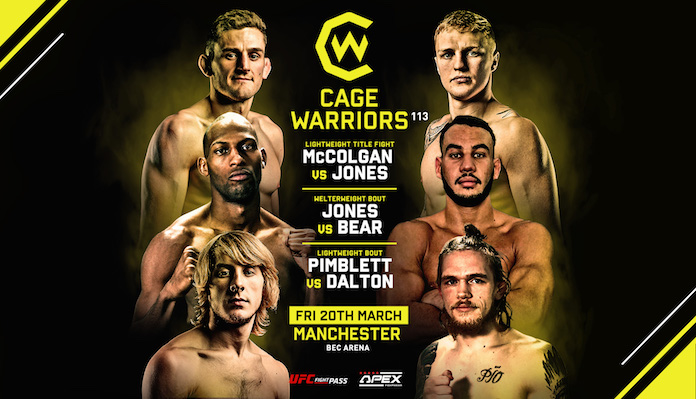 Although most of the sports world is currently on a hiatus right now due to the coronavirus pandemic, there are still some mixed martial arts events happening around the globe. Despite most sports leagues shutting down for the next few weeks or months, the UK-based promotion Cage Warriors decided to hold its Cage Warriors 113 event this Friday in Manchester, England. During a time when sports fans don’t have much else going on, Cage Warriors 113 was a welcome reprieve from everything going on in the world right now.

In the main event of the evening, UFC fighters Bartosz Fabinski and Darren Stewart grinded each other for 15 minutes in a fight that went the full three rounds. Fabinski was able to plant Stewart down on the mat and win a unanimous decision for the biggest win of his career to date. Despite taking place in Cage Warriors, this was essentially a UFC fight. And in the co-main event, Mason Jones knocked out Joe McColgan in a quick fight to win the Cage Warriors lightweight title.

Take a look at the rest of the Cage Warriors 113 results below (via MMAjunkie.com).

The Dragon roars in Manchester 🐉 #CW113

A devastating finish in round, Mason Jones is the NEW lightweight champion! 🏆 pic.twitter.com/rDRPR9LPgf

From the brink of defeat! 🤯
Coner Hignett with a huge KO comeback at #CW113 pic.twitter.com/4FI4nMJf3M

What did you think of Cage Warriors 113?