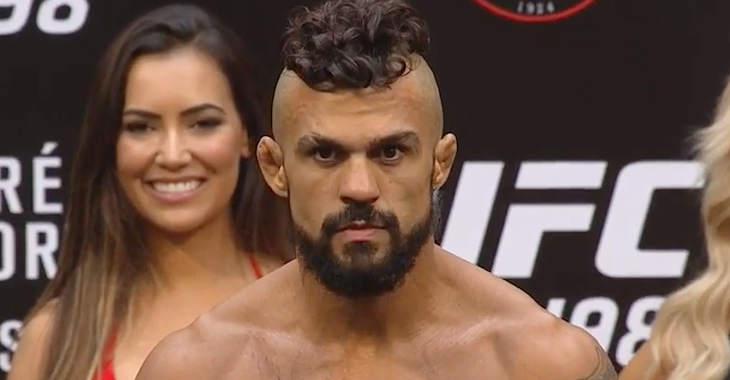 When Vitor Belfort lost to Gegard Mousasi in the co-main event of UFC 204, he fell to a tough 2-3 in his last 5 fights – with both of those wins coming against the now retired Dan Henderson.

Needless to say, the former light heavyweight champion appears to be on a bit of a downslide. As such, many fans were quick to call for his retirement in the wake of his loss to Mousasi. Though it seemed for a moment that Belfort actually planned to retire after this loss, we later learned that he intended to keep fighting.

In a recent interview with Giro Combate (via MMAFighting.com), Belfort listed a few opponents he’d be interested in fighting when he does step back into the cage. The first of these options is former middleweight champ Anderson Silva, who he lost to back in 2011.

“I know the UFC has sat down to do big fights,” Belfort said of a potential rematch with Silva. “I never had anything personal against Anderson. Quite the opposite. That fight with me changed the history of MMA. I know how important that fight was. But it’s a fight fans absolutely wanna see.” Silva, of course, is not the only potential opponent on Belfort’s radar. The decorated veteran is also interested in a scrap with welterweight great Nick Diaz, who has recently competed in the middleweight division.

“Nick Diaz is a good fight,” Belfort said of this potential showdown. “I would like this fight. He’s a guy with good boxing and good ground game, so it will be a good challenge.”

In addition to Silva and Diaz, Belfort also admitted he’s interested in rematches with current middleweight champ Michael Bisping, who he beat in 2013, and former champ Chris Weidman, who he lost to in early 2015.

“I would love to fight him,” Belfort said of Bisping. ” I’d give him another head-kick. I know he doesn’t have a fight, doesn’t want to fight anyone. He’s picking a rematch, right? He chose Dan Henderson. He chose Dan Henderson to fight, so I’m offering myself. He doesn’t want to fight ‘Jacare’ [Souza], so let’s do this rematch. The UFC is doing a lot of rematches, and he has this fight stuck [in his throat]. He tried to avenge that loss to Dan Henderson and only wins robbed decisions. I will put an end to this. I won’t let it go to the judges. I’ll give him another head kick.”

“Weidman would also be a good option, too,” Belfort continued. “A rematch, [a fight that is] stuck in my throat. That’s it. I think it’s the year of the rematches. The UFC is going in this direction right now. Fight that fans want to see.”

Out of Silva, Diaz, Bisping and Weidman, who would you like to see Belfort fight next? Sound off, PENN Nation!